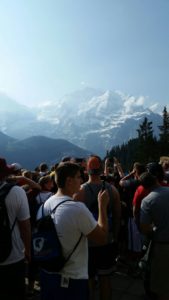 Rose-Hulman had traveled with Global Football on three previous occasions to England & France 2002, Italy 2008, and the Czech Republic & Austria 2011.  Between May 29 and June 6, their visit to Europe took in a Jungfrau Valley hike and Lutschine River activity, Neuschwanstein Castle, and Munich and Vienna sightseeing.

Rose-Hulman faced the Landsberg X-Press on a perfect hot summer’s day and led 21-0 at the end of the first quarter.  Tyler Brutofsky returned a punt return 51 yards to open a seven-point lead, which was added to by Garrett Wright rushing touchdowns of 11 and 4 yards, with, Jae Murray adding all three extra points.

The Fightin’ Engineers scored once in the third quarter on an 18-yard pass from Chris Johannigman to Garrett Wight that was converted by Murray’s PAT.  Four fourth quarter touchdowns and another Kirby interception completed the win.