U of Puget Sound – China 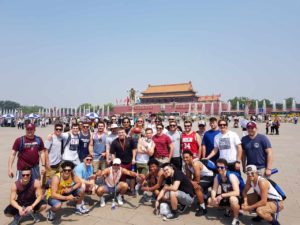 Global Football’s second venture into China in 2017 marked the 28th different nation visited by the Texas-based organization that took a total of seven NCAA and NAIA schools overseas for the experience of a lifetime.

“Puget Sound football prioritizes the complete student-athlete experience,” said coach Thomas.  “This once-in-a-career opportunity provides an academic, athletic, and cultural education that will be cherished for years to come.  We pride ourselves in representing the university always.”

The Shanghai Titans have been in existence for three years in the American Football League of China.  They recently won the 2017 AFLC Championship and they are known as a team with a good following and a good team culture.

While in China, the group visited Tiananmen Square and the Forbidden City while in Beijing, the Great Wall of China, the Beijing Olympics Bird’s Nest Stadium and the Ming Tombs on the Sacred Way.  They took part in a Taiji lesson and watched a Kung Fu show and traditional Chinese tea ceremony.

Having taken the almost five-hour train journey to Shanghai, the Loggers went on a Huangpu River cruise, and visited the Yu Yuan Garden and Jin Mao Tower.