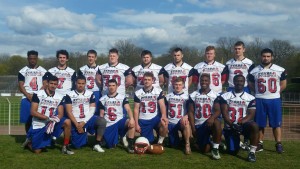 Standout student-athletes from across the United States had an opportunity to visit the Czech Republic and Germany during spring 2016, from April 2-10, and to participate in the Global Ambassadors Bowl.

For the ninth year in succession a group of select high school seniors lined up as the Team Stars & Stripes American football squad to play against overseas opposition, the GHS (German High School) Hawks, winning 36-0.

Previously known as the Global Bowl, the Global Ambassadors Bowl was played on Saturday, April 9, in Hanau, a town in Hessen near Frankfurt, Germany, but the action on the gridiron was only one element of the educational visit to Europe. 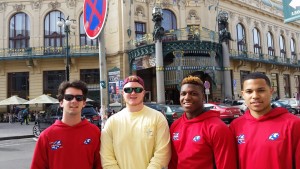 The traveling American group arrived in Prague in the Czech Republic on Sunday, April 3, and took a tour of the Old Town, including the Old Town Square, the 18th century Church of St Nicholas, the beautiful Goltz-Kinsky Palace, the medieval Charles Bridge which spans the River Vltava, and the former Jewish Ghetto. 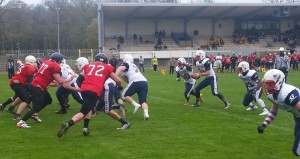 The group visited the Terezin concentration camp, the Museum of Communism, a Nuclear Bunker and Krizik’s Fountain before traveling across the border to Germany to enjoy a Night Watchman tour of medieval Rothenberg.