The Illinois Wesleyan University football team will travel to Finland this summer to face the Finnish national team in Helsinki on Sunday, June 2. 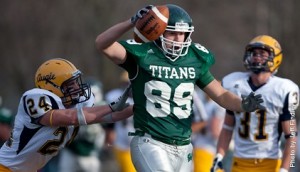 Illinois Wesleyan will combine a week of summer sightseeing in Scandinavia with practices and a game to help prepare for their 2013 College Conference of Illinois Wisconsin season, while Finland will use the clash with the Titans to ready themselves for the build up to the 2014 European Championships.

“It is wonderful to work with Coach Eash and Illinois Wesleyan again, as he has the vision to undertake such a mission every four years so that each of his student athletes can have this experience. Plus, we have not taken a team to Scandinavia for more than a decade, so this will be a fun reunion in Finland and Sweden.  Roope Noronen and all of the SAJL Finnish federation have worked hard to make this a memorable trip and game.”

Illinois Wesleyan will head overseas with event organizers Global Football for the fifth time, having previously visited Italy, France, Austria and Germany.  Coach Norm Eash and his squad of 70 players and 15 staff depart for Helsinki on May 31, returning on June 9.

“These trips have proven to be invaluable in maintaining off season focus and developing a stronger, more unified team giving us a competitive edge for the upcoming season,” said Titans coach Norm Eash.  “We look to build team chemistry, evaluate our players and begin the process of finding our team’s identity.  This game will allow us to move forward toward our goal of winning a conference championship and advancing to the NCAA Division III playoffs.  This game is the start of our season.”

Finland’s head coach Tuomas Heikkinen was a prominent member of the Finnish national team, which has won the European title five times, including four straight championships, the most recent in 2000.  As Finland aspires to reclaim its grip on the continent, the visit of Illinois Wesleyan is regarded as ideal preparation before facing Austria, France, Germany and Sweden next year.

“It is very difficult to get opponents to play against outside of competitions and our annual game against Sweden for a number of reasons, so this is a valuable game for us,” said Heikkinen.  “Players have their club games to deal with so it is hard get them all into one place at the same time.

“I really appreciate the cooperation we’ve had from Illinois Wesleyan and am very much looking forward to them coming here.  We have had great help from our federation who have halted the season so we can get all our players together and this will be a great occasion.”

The Finnish federation SAJL is a governmental approved non-profit organization founded in 1979 and promotes American football at all levels from recreational to the top Maple League, by spreading knowledge of the game.  SAJL has 35 member clubs and 2,259 licensed players playing football in men’s, women’s and youth leagues.