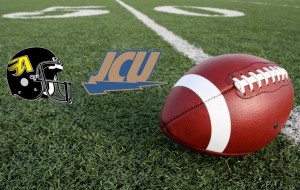 John Carroll University cruised to an 81-7 win over the Pesaro Angels in front of an enthusiastic 1,500-strong crowd in Italy as coach Tom Arth’s Blue Streaks focused on the football element of their overseas visit with Global Football.

John Carroll won the toss and elected to receive the ball, and Watson carried four times, the fourth for a two-yard touchdown and a 7-0 lead after Pat O’Hearne added on the PAT.

Following an interception by Reese Armstrong, junior Schaefer connected with Alex Kline over 48 yards for a 14-0 lead and then after the Angels went three and out, he found Jake Mooney and pay dirt again from 13 yards out to increase the advantage to 21 points. The signal caller’s third scoring pass came after a long punt return as he found Zach Strippy for a 10-yard touchdown.

The Italian hosts were far from demoralized and Pesaro put seven points on the board by returning the ensuing kickoff 90 yards for a touchdown to bring the raucous home crowd to its feet.

Watson again breached the end zone on a 9-yard run to make it 35-7 to close the first quarter and late in the half went over again from 22 yards with his third touchdown of the evening. Between Watson’s scores, quarterback Patrick Kramer had hit Robert Grosso from 39 yards for a touchdown out before the extra point was blocked.

In the third quarter, Schafer’s fourth touchdown pass of the evening landed in the hands of Klein over 62 yards, but the extra point was blocked.

The lead was increased to 61-7 when linebacker Lucas Hook recovered the ball on the two-yard mark and went in to score, marking the first defensive touchdown of new defensive coordinator Chris Shula’s Blue Streaks tenure.

Mark Baniewicz scored on the ground from three yards out and John Carroll led the Pesaro Angels 67-7 at the end of the third quarter.

Andrew Freeman scored on a 28-yard run and quarterback Kramer found the end zone from 15 yards out to add to the touchdown pass he had thrown in the second quarter to round off the scoring.