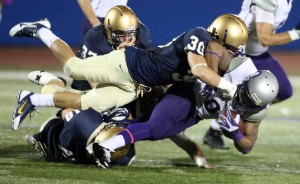 John Carroll University will head to Greece and Italy next week to prepare to face Italian league team the Pesaro Angels as part of a nine-day overseas tour organized by Global Football.

The Blue Streaks have been regular travelers with Global Football, which has created and produced games and events in 21 different nations around the world since 1996. In 2012 John Carroll University opened the NCAA college football Division III season in Dublin as part of the Global Ireland Football Tournament.

“We have been privileged to have John Carroll University take their fine student-athletes across the ocean with us on numerous occasions and experience a new culture while preparing for the next football season on the field,” said Global Football President Patrick Steenberge. “This traveling group will enjoy the wonderful hospitality of our Italian hosts and the FIDAF federation that develops the sport in Italy. As an added bonus they will also witness the spectacular sights of Rome and Athens while traveling with Global Football.”

Head coach Tom Arth returns to Italy for a second time with Global Football having been the Blue Streaks quarterback when they traveled to Italy in 2002. He is a familiar face to European fans of American football, having played with the Scottish Claymores and Hamburg Sea Devils of NFL Europe in 2004 and 2005. During his NFL career he had the distinction of backing up two legends of the game in Peyton Manning and Brett Favre while a member of the Indianapolis Colts and Green Bay Packers respectively. 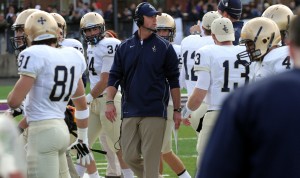 “This trip is an extraordinary opportunity for our players to travel to Athens and Rome, two of the most historically significant cities in the history of the world,” said Coach Arth. “This will be our eight trip to Europe as a football program since 1994 and we are incredibly grateful to John Carroll University for supporting and encouraging this type of experience for our student-athletes.

“Opportunities like this are a hallmark of Jesuit education. It is about how we can make the experience of each individual on our campus special and unique. Trips like this are one way we try to do that within our football program.”

During his coaching tenure at JCU, Arth has served as a quarterbacks coach, co-offensive coordinator, assistant recruiting coordinator, and director of football operations. He helped the Blue & Gold offense average 396 yards and 28.9 points per game in the last three seasons.  From 1999-2002, Arth set 18 John Carroll football records as its quarterback, earning unanimous All-American honors as a junior and senior. In 2002, he guided the Blue Streaks to a 12-2 record, an East region championship, and a berth in the NCAA Division III national semifinals for the first time in program history.

The Blue Streaks will head to Italy on May 15 and will enjoy the sights of Rome and Pompeii, while also visiting Vatican City and spending time on the beach in Pesaro. The game against the Pesaro Angles will kickoff at 8.30pm local time (2.30pm US ET) on Monday, May 19.

The John Carroll traveling party will then take an overnight ferry from Ancona to Patras in Greece, where they will spend four days sightseeing, visiting the ancient ruins of Delphi, and enjoy guided tours of Athens, taking in the Acropolis and the Parthenon.