Luther College traces its roots back to the nation of Norway and in May, the Iowa school’s football team will head to Scandinavia to take on the Norwegian national American football team.

Head coach Aaron Hafner will lead the Norse Nation against a Norway team that will play competitively for the first time since 2007 following a period of rebuilding.

“We are very excited to finally take the field as a national team,” said Norway Coach Jørgen Benestad-Johansen. “The opportunity to host Luther College and Global Football just adds to the excitement. A proven builder of football worldwide, combined with a college team, which has strong Norwegian roots, is a great opportunity for our sport in Norway.

“Luther football has shown growth and improvement over the last couple of years, and this will be a tough opponent for us. It is hard to tell how the two teams will match up against each other, but the game itself will be a great experience for the men on both teams, I am sure.” 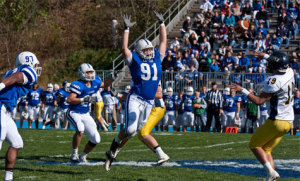 Many schools and colleges that travel with Global Football have an emotional or historical link to the country they visit, and Luther College in particular has an historical connection with Norway. The Norwegian Evangelical Lutheran Church in America decided in 1857, to found a college in St. Louis. In the summer of 1862 the school was transferred to Decorah, Iowa, where its first home and original building still stands, having been dedicated in 1865.

The decision to head to Norway and neighboring Denmark to experience international travel and the unique opportunity to face European opposition on the gridiron was therefore a natural one for Coach Hafner and the Norse.

“We are very excited for the opportunity to go to Norway and Denmark,” said Coach Hafner. “Luther College has deep roots to Norway, so this makes this trip a special opportunity for our young men to see the foundation of our college and the Decorah community. Our players and coaches will be studying Norwegian culture and history throughout the spring semester in preparation for our travels to these Scandinavian countries. Not only to we get to see all the things we are studying, but we will have an opportunity to play American football against the Norwegian national team. Global Football has encompassed everything in this trip that our football program represents: academics, community service, family, fun and football.”

Global Football President Patrick Steenberge notes, “Having met Coach Hafner this past December while he joined the Tazon de Estrellas staff in Mexico, I am excited to help him achieve the academic and athletic goals he has set for this tour to Scandinavia. It will be an honor to travel with them personally, and to work closely with our new friends in Norway and Denmark. I am confident this will be a life-changing experience for everyone involved.”

Hafner is in his second year as head coach, having taken over the Norse program after serving seven years as the offensive coordinator at William Penn University (Iowa). He led the Norse to a 5-5 record in 2014 and traveled with Global Football to Mexico in December as a member of the Team Stars & Stripes coaching staff for the annual Tazón de Estrellas NCAA Division III select game.