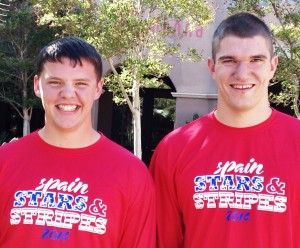 Every American football team has its standout players. Two student athletes from Mountain View High School in Arizona have the credentials to step up and be leaders on the Team Stars & Stripes junior select team that heads to Barcelona on March 22 to play in Global Bowl Spain.

After representing the United States on the football field, David Odgen and John Reynolds, who both play on the offensive line, with Odgen also operating at fullback, are poised to serve their country in the military. After graduation, Ogden will head to the U.S. Naval Academy and Reynolds to West Point.

Global Bowl Spain will see the roster, known as Team Stars & Stripes drawn from multiple states, travel across the Atlantic from March 22 to 30. As part of the cultural experience of the visit to Spain, Team Stars & Stripes will enjoy the sights of the region before taking on the Cataluña under-19 representative team on Saturday at 2:00pm in a Barcelona stadium just 100 yards from the beachside Olympic Village under head coach Bill Gallagher of Episcopal Academy in Pennsylvania.

GlobalFootball.com sat down with the linemen and asked them about the upcoming journey overseas and their ambitions when they begin their military service.

What are you most looking forward to about the visit to Spain?

Reynolds: “I believe that it will be just incredible to experience a country other than the United States. I haven’t been out of the country since I was in the second grade, and I’ve never been to Europe in my life, so to go my senior year and visit a different place as beautiful and historic as Spain will be just incredible.”

Ogden: “I am looking forward to meeting other people on the American team and having the opportunity to represent the United States in the Global Bowl. I enjoy traveling and the opportunity to experience another culture and meet international students my age with similar interests excites me.”

What, if anything, do you know about American football in Spain and what standard to you expect your opponents to be?

Reynolds: “Well, even though this is a trip to another country and it will be an unbelievable amount of fun, when it is time for football, whether it be practice or the game, I will be focused, and it will be business as usual. I understand that our opponents are composed of the best football players in Spain, and I will prepare for them as I prepare for the best players in Arizona or in the United States.”

Ogden: “I do not know much at all about American football in Spain. I assume the sport is fairly new in the country but nevertheless I expect my opponents to play hard and give us a challenge. We both have a great opportunity to play the best sport in the world and I expect them to give it their all and have fun just like I expect the American team to.”

What do you bring to the team in terms of attributes both on and off the field?

Reynolds: “On the field, I take pride in my ability as a lineman and my football intelligence. Furthermore, I have proven myself as a leader on the field as I was one of the team captains for my high school team this past year. Off the field, I am sure my fellow teammates and coaches will enjoy my sense of humor, even though my jokes are pretty lame. But I think they’re hilarious, they make me laugh every time.”

Ogden: “As a player I bring the team an individual with passion, dedication, a strong work ethic, and the intelligence to learn new plays, schemes, and techniques quickly in order to make the team successful as a whole. I am a team player. As a person I bring the team an individual with morals and character. I will provide the team with social skills, especially when it comes to meeting people from a different country. I spent six months in Australia, and that opened my eyes to integrating with people from other cultures and countries. With that I experience I gained a strong sense of curiosity, and I will have no qualms with trying new things and having fun while still showing respect when we meet the Spanish team.”

To John Reynolds: What inspired you to attend West Point?

“I have always loved the United States of America more than anything in the world, and I have several relatives who have served for our great nation. Originally I applied to West Point because I knew that the application process was very tough and intense, as in addition to getting accepted by the school, you also needed to get a nomination from a US Congressman.

“When one of my counselors, whose two sons attend West Point, began to explain to me what it was like there, the grin on my face grew from the start of her talking until the end, and I have known that that was where I wanted to go ever since.”

To David Ogden: What inspired you to attend the U.S. Naval Academy?

“I have been interested in the Navy for since I was a young kid. This is an excerpt from my personal statement for my application to the Naval Academy, and it explains my passion.

‘I have been interested in naval aviation since I was a young child when I watched movies like Top Gun and military documentaries on the History Channel. This fascination developed into a desire to become an officer in the United States Navy. I knew I was truly dedicated to a career when I attended a scout meeting with retired Navy Captain Alan Steichen as a guest speaker. Captain Steichen told us about his experiences as a fighter pilot and officer in the service. I will always trace my intent to serve in part to this meeting because when he was asked why he served, Captain Steichen responded “You do it for your flag and for your country.” That simple answer made me realize why naval aviationevoked so much personal interest: I want to serve my country and defend the American way of life. The Navy serves as America’s first line of defense, and I want the opportunity to play an active role in it.’

“I learned that the Naval Academy was the best way for me to attain my vision of serving the United States in the Navy, and as such I worked at attending the institution from a young age. It has paid off as I will attend the Academy in July and there is nowhere I would rather go.”

Can you explain what you will be doing while serving in the military and what are your long-term goals and plans?

Reynolds: “West Point is short for the United States Military Academy at West Point, and there I will be training to become a United States Army Officer. Everything I do in college is designed towards being the best leader of character that I can be in order to successfully lead a battalion of troops after I graduate. This is not limited to the classroom either; I will undergo basic training, and during the school year I will have to focus on physical and military aspects of my character in addition to the academic aspects. I plan to study math or government at West Point.”

Ogden: “The Naval Academy is a public four-year institution much like any university. I will work towards my Bachelor’s Degree in Aerospace Engineering and completing all of the academic workload required within four years. On top of normal classes I will learn military strategy, history, and other essential skills necessary for becoming an officer in the Navy. I have to keep up with intensive PT training, and I am contemplating continuing sports there by trying rugby and continuing with music in the Academy’s various bands.

“My ultimate goal is to become a fighter pilot, which will require an additional two years of flight school after I graduate from the Academy. I want to work my way up into ship command and hopefully earn the command of a carrier battle group. I intend on pursuing a career in the Navy and earning retirement after 20 or 30 years.”

What are your expectations of playing on this select team in terms of differences between that and your high school team?

Reynolds: “It’ll be a good time. Even though I only know one person on the team, football is such a great sport that, even within the confines of a week, people are brought together. So it will be an exciting opportunity to meet and build friendships with other football players across the nation. And I am definitely excited to play for Coach Gallagher; I’ve heard nothing but great things about him.”

Ogden: “I expect our team to have a bit more discipline and a faster pace of learning than my high school team. I feel that we will not need to spend as much time learning plays and that we can work towards perfecting our scheme and just having fun when we go out to play instead of needing to drill plays over and over.”

What are you looking forward to in terms of the cultural experience in Spain?

Reynolds: “As a lineman, it is only expected that I say that I am most looking forward to the food in Spain. I love all kinds of food, and it will be both culturally and deliciously fun to experience the food in Spain.”

Ogden: “I am looking forward to meeting the other players and hearing from them about their daily lives. I will enjoy learning a little about Spanish history when we are there. I am most excited to experience Spanish food (as a true lineman).”