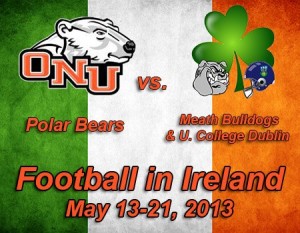 Ohio Northern University heads to Ireland on Monday, traveling overseas with Global Football for the third time, and will play against an Irish all-star team during their cultural and sports visit.

Coach Dean Paul will take his Polar Bears football roster to Ireland from May 13-21 and will combine sightseeing in Galway and Killarney with practices during the visit, which is highlighted by an exhibition game at University College Dublin on Wednesday, May 15 at 6pm local time (1pm EST).

“Coach Dean Paul has been a regular traveler with us and has also coached in the Tazon de Estrellas game in Mexico three times, and it is his vision for his student-athletes that gives them an opportunity to enjoy life experiences such as this,” said Global Football President Patrick Steenberge.  “UCD Director of Sport Brian Mullins and Dave Murphy from the university’s American football team have worked diligently to ensure the game against ONU goes ahead and we thank them and all at UCD for their hard work and support.”

The Irish opposition will consist of players from University College Dublin and the Meath Bulldogs, two clubs whose assistance was key in helping Global Football stage the successful GIFT tournament in Ireland last summer, and players from other local teams, including Trinity College.  More than 12,000 fans attended six games featuring 12 high school teams from the United States and Canada played on the eve of the Navy vs. Notre Dame Emerald Isle Classic in and around Dublin.

“This is a wonderful opportunity for our student-athletes and we are excited to once again take our players to see a part of the world that they may not have been able to see otherwise,” said Coach Paul.  “It is a chance for our young men to grow as individuals and to be ambassadors of the University, the United States and as American football players in a foreign country.”

The game will mark the third time that the ONU football team has traveled to Europe to play an exhibition game.  The Polar Bears defeated an All-Star club team 77-0 in Furstenfeldbruck, Germany, and downed an Italian All-Star club team 63-6 in Pontremoli, Italy in 2010.

The NCAA allows Division III schools to travel internationally for an exhibition game once every three years and Ohio Northern is fully taking advantage of that opportunity.  While in Ireland, ONU will take in a Dublin city tour, visit the historic 82,000 seat Croke Park Stadium, the GAA museum and the Guinness Storehouse.  They will also visit Trim Castle in nearby County Meath, with a special lunch at the Knightsbrook Hotel and will travel to the Blarney Castle, the Cliffs of Moher and the Aran Islands.