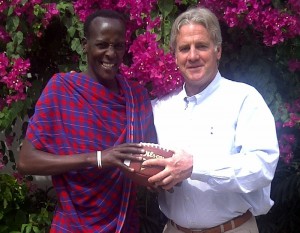 Hon. Amb. Kagasheki, in making the announcement, said that “Tourism is the leading earner of Foreign Exchange in Tanzania, and the United States is Tanzania’s most significant tourist generating market. For this reason, we recognize the pivotal role that Goodwill Ambassadors can have on impacting key agenda items of the country through marketing, promotion and facilitation of strategic partnerships in their special areas of influence.”

Each of the three Goodwill Ambassadors has already made a huge impact on Tanzania Tourism. Patrick Steenberge, President of Texas-based Global Football, was the visionary who brought the first ever college American football game played on African soil to Tanzania in May of 2011.  The game itself, played between Drake University from Iowa and an all-star team from the CONADEIP conference of schools in Mexico, generated enormous press coverage including ITV Tanzania, ESPN Magazine and a 45-minute documentary broadcast on CBS Sports Network.  But the true highlight was the goodwill and friendships that were created when the players and their families and friends who joined them in Tanzania, completed a charity climb of Kilimanjaro and participated in volunteer projects to benefit the local communities. The visiting players and coaches also held American football clinics to introduce more than 500 local youngsters to the sport.  The impact in the sports world and in the communities is on-going for Tanzania and Global Football is planning a second game and philanthropic visit to Tanzania in the near future.

About Tanzania: Tanzania, the largest country in East Africa, is focused on wildlife conservation and sustainable tourism, with approximately 28% of the land protected by the Government, the largest percentage of any country in the world. It boasts 15 National Parks and 31 game reserves, 50 Game Controlled Areas, one special Conservation Area (the Ngorongoro) and three Marine Parks. It is home to the tallest mountain in Africa, the legendary Mt. Kilimanjaro; The Serengeti, home to the “Great Animal Migration” that was named the New 7th Wonder of the World by USA Today and ABC TV’s Good Morning America; the world acclaimed Ngorongoro Crater, often referred to as the “Eden of Africa” and the “8th Wonder of the World”; Olduvai Gorge, the cradle of mankind:  the Selous, the world’s largest game reserve; Ruaha, now the second largest National Park in Africa; the spice islands of Zanzibar; and seven UNESCO World Heritage Sites. Most important for visitors, the Tanzanian people, with a rich history and diverse blend of cultures, are warm and friendly. On December 9, 2011, Tanzania, an oasis of peace and stability with a democratically elected and stable government, celebrated its 50th Anniversary of Independence. For more information on Tanzania, visit www.tanzaniatourism.go.tz.