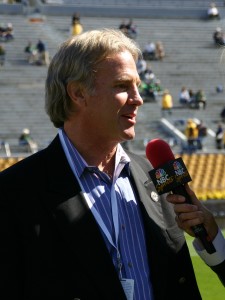 Global Football President Patrick Steenberge has been invited to speak as part of the Sport Summit at the prestigious Web Summit event ‘Where the Tech World Meets’ in Dublin, Ireland, on Wednesday afternoon, November 5.

The success of the 2012 and 2014 Global Ireland Football Tournament organized by Global Football, and Patrick Steenberge’s role as a catalyst in the staging of the Croke Park Classic this summer led to an invitation to join an illustrious list of more than 500 guest speakers in Dublin.

Steenberge, who was an amateur athlete when he played college football as a quarterback at the University of Notre Dame, will join Gaelic Players Association President Donal Og Cusack for a session to discuss ‘Amateur Ethos in a professional game.’

“I am honored to speak at such a high-profile event and look forward to a lively discussion with Donal Og Cusack,” said Steenberge. “It is testament to the great events we have been able to organize in Ireland and the valuable partnerships we have established that I have an opportunity to participate at Web Summit.”

Since 1996 Global Football has created and produced American football events in 21 countries worldwide, including the 2011 Global Kilimanjaro Bowl, the first American football game ever staged in Africa, which will soon feature in a book, Tupande Kileleni: Let’s Climb to the Summit Together. It is the story of how student-athletes and their leaders from the United States and Mexico took one man’s dream and through commitment and teamwork were able to showcase their sport to an eager crowd of 12,000 intrigued Tanzanians, then perform valuable community service work before climbing to the summit of Mt. Kilimanjaro.

Web Summit runs from November 4-6 and has been called ‘the best technology conference on the planet’ with attendees ranging from Fortune 500 companies to the most exciting startups in the world. Forbes magazine called Web Summit ‘The new hot ticket on the tech conference scene.’

What people have said about Web Summit:
“The biggest event of its kind in Europe.” – CNBC
“Everywhere you go it’s buzzing and it’s electric.” – Bloomberg
“The best conference we’ve ever attended.” – Mashable
“One of the hottest events in tech.” – CNN
“Unique among European conferences.” – Wall Street Journal