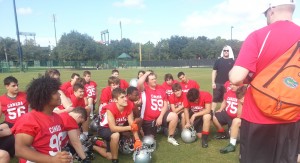 Canada East will take on Canada West for the International Games championship at the 57th annual Pop Warner Super Bowl at ESPN’s Wide World of Sports Complex in Lake Buena Vista on Saturday.

Canada East followed up a convincing first round win over Puebla with a victory over Mexico 1 as a 17-point shutout earned them a place in Saturday’s final at 9am ET.  They will face fellow Ontario team Canada West, who eventually edged Toluca 18-12 in a game that looked to be heading to overtime.  Just as they had during the first round of games, Mexican side Toluca proved to be a tough opponent and was tied 6-6 with Canada West at halftime and 12-12 with two minutes remaining before the Canadians scored the winning touchdown.

Toluca will now face Mexico 1 on Saturday, with both teams boasting a 1-1 record in the tournament and the two other .500 teams, Panama and Queretaro, will meet.

Panama fired 34 unanswered points against Puebla as Honorary Chairman Frank Davis was on hand meet all players, and the former Detroit Lions NFL lineman’s words of inspiration for his fellow Panamanians clearly spurred them on to victory.  Puebla will now face Mexico 2 in their final game on Saturday.

In the Pee Wee division of International Friendship Bowl games, Mexico 1 lost 31-0 to Mid Florida, while the Mexico 2 Junior Midget lost 38-0 to Mid Florida, but cherished the opportunity to play against American opposition at ESPN’s Wide World of Sports.

“We were treated to another great day of games and young international players enjoying the chance to play at a world class facility at this fantastic event, “ said Global Football President Patrick Steenberge.  “As an added bonus, the Halcones dance team from Mexico produced a spectacular performance as part of the Cheer & Dance event.”

Friday features an International Speed Clinic at the ESPN Wide World of Sports Complex for all the participating teams at 1pm then the International Division will feature its third and final round of games at 9am on Saturday.