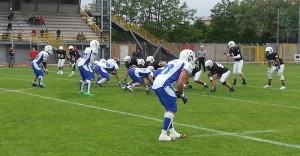 Earlier in the day as part of a unique double-header at Stadio Com Rochi, Siena Heights University’s women’s soccer team rounded off three games in Italy with a narrow 3-2 defeat to SS Lazio of Serie A in Viterbo.

“It was a thrilling day for Siena Heights players, coaches and families,” said Patrick Steenberge, President of Global Football who organized the overseas visit for the Michigan-based University. “Many thanks to our wonderful Italian hosts, players and their friends and family members on hand to really make this a special day, and to our long time friend, Italian team head coach, John Mackovic.”

The Italians scored first with a 30-yard Stafano Di Tunisi field goal on the hosts’ opening possession. The response from the Saints was immediate and Zajkowsky connected with Campbell for a 35-yard touchdown pass and Matthew Horton tagged on the first of five extra points on the afternoon for a 7-3 lead.

Having stopped Italy, Siena Heights scored again when Dunson returned a punt 67 yards for a touchdown and a 14-3 advantage. The running back scored again, this time on a 69-yard pass from Zajkowsky to earn the Americans a 21-3 lead at the end of the first quarter.

Dunsun returned the second half kickoff to the Italian ten-yard mark to set up a White five-yard touchdown dash three plays later and open a 25-point lead following the PAT. The scoring was complete in the third quarter when Zajkowsky found White for a 24-yard scoring pass. 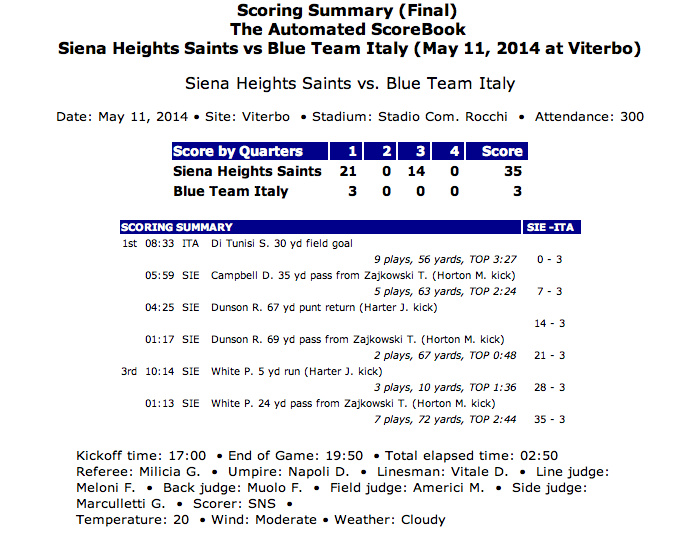 Siena Heights University’s women’s soccer team rounded off three games in Italy with a narrow 3-2 defeat to SS Lazio of Serie A in Viterbo.

The Saints found themselves trailing 2-1 at halftime with Kacey Lawniczak finding the target, assisted by Kelsey Young.

Lazio went 3-1 ahead early in the second half, but in a hotly contested encounter, the Saints put pressure on their hosts with a goal from a corner kick by Kelsey Young with five minutes remaining.

The Italians held on to win 3-2 despite a late surge of pressure from Siena Heights.

Earlier in the week, as part of a 10-day visit with Global Football to Rome, Florence, Sienna and Viterbo from May 5-13, the Saints played two contests against Firenze of the Italian Serie A League, losing 2-0 and 3-1.

In game one, Caitlyn Kort finished with six saves.  Firenze held a 22-6 advantage in shots, while the Saints had four shots on goal.