Rose-Hulman Fightin’ Engineers head to Barcelona on June 2 to tour Spain with Global Football and take on local American football club the Reus Imperials at the Municipal de la Pastoreta on Saturday, June 7.

Head coach Jeff Sokol, who was named the 2013 Heartland Collegiate Athletic Conference (HCAC) Coach of the Year, has traveled previously with Global Football, serving as a member of the Team Stars & Stripes coaching staff at the Tazón de Estrellas in Mexico. He also led the Fightin’ Engineers to a 35-34 win over the Austrian national team in the Charity Bowl when traveling to Vienna with Global Football in 2011.

“Barcelona is a popular destination with schools that travel overseas with us, and the local people and teams are always very friendly and accommodating,” said Global Football President Patrick Steenberge. “This will be the sixth spring tour of 2014 for Global Football and is the ideal way to wrap up a perfect season of travel for American schools and colleges.”

Rose-Hulman is coming off a successful season, having won its first conference title since 1988 under Sokol’s leadership. The Fightin’ Engineers shared HCAC championship honors with nationally ranked Franklin College by finishing 7-1 during the conference schedule. 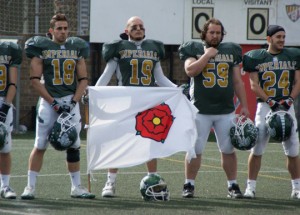 From their home stadium the Municipal de la Pastoreta, Spanish opponents the Reus Imperials have reached the final of the Serie B National League of American Football competition where they will face the Mallorca Voltors. The Imperials beat Barbera Rookies 20-0 in the quarterfinals and Las Rozas Black Demons 20-7 in the semifinals.

“The international experiences have become a huge part of the Rose-Hulman football program,” said coach Sokol. “Traveling to Barcelona is a wonderful opportunity for our guys, and they are looking forward to experiencing all the wonderful things that Spain has to offer. We also look forward to playing a competitive football game.”

In his three years at Rose-Hulman, Sokol has led the Fightin’ Engineers to one HCAC championship (2013) and one conference runner-up finish (2011). His career record stands at 17-7 in HCAC action.

In 2013, Rose-Hulman won seven of eight conference games with a season for the ages. The Fightin’ Engineers completed their largest in-game rally since 1988 by turning a 20-0 deficit into a 34-26 victory at Bluffton University. The offensive unit recorded the second-most points (322) and second-most yards (4,150) in school history. First-year starting quarterback Ryan Landwehr was selected for the Tazón de Estrellas, and defensive tackle Dean Griffing joined punter Eric Schaible at the DIII Senior Classic.