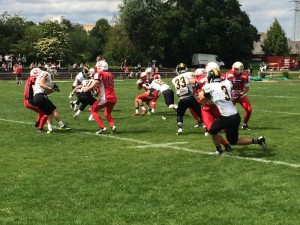 The Southwestern University Pirates triumphed 48-7 over German Football League side the Stuttgart Scorpions on Sunday.

The highlight of an overseas spring tour from their home base in Georgetown, Texas to Germany with Global Football saw the Pirates take on a Scorpions team that has opened the new 2014 GFL season with three wins and currently tops the GFL South Division in a domestic league that is considered the most competitive on the continent.

The game was part of a unique ‘Super Global Sunday’ double-header as for the first time in 19 years of exporting American football around the world to 21 nations, Global Football had two teams playing simultaneously in two different European countries. While Southwestern met the Scorpions, in Vienna, Claremont-Mudd-Scripps faced the Austrian national team in the annual spectacle, the Turkish Airlines Charity Bowl.

The Pirates opened the scoring when Bryan Hicks went on a 36-yard touchdown run behind block of Will Irving and Laith Tucker tagged on the extra point. Hicks then went 31 yards through the air with a scoring pass to Hunter Hazen, capitalizing on an earlier fumble recovery by Taylor Fann.

The Scorpions hit back in when quarterback Luke Barthelmess, who led Global Football’s Team Stars & Stripes to a 29-7 win over Mexico’s CONADEIP All-Stars in the Tazón de Estrellas in Mexico in December 2013, threw for a 13-yard touchdown to reduce the deficit to six points.

Justin Pelt broke into the end zone from 12 yards out after an 81-yard kickoff return by Colton Williams and then it was 27-7 as Tyler Frisby scored on 11-yard touchdown run. By halftime the Pirates held a commanding 35-7 lead as Zach Cole returned an interception 33 yards for a touchdown and Hicks ran in the two-point conversion

Coach Joe Austin’s side found the end zone twice in the second half as a Morgan Records interception set up a 52-yard pass from Hicks to Hazen and then at the two-minute warning, Taylor Fann returned a fumble 91 yards to pay dirt.