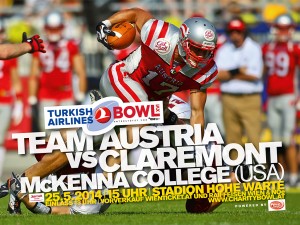 For the first time in 19 years of exporting American football around the world to 21 nations, Global Football will have two teams playing simultaneously in different European countries when Global Super Sunday kicks off at 9am US ET / 3pm local time. For Southwestern fans in Texas this will be 8 am, while Claremont California local time will be 6 am. 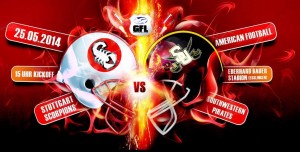 will face the Austrian national team in the annual spectacle, Turkish Airlines Charity Bowl, while across the border in Germany Southwestern University will take on the always strong Stuttgart Scorpions.

“We have played multiple games in one country previously, such as at the GIFT 2012 event in Ireland, but have never kicked off simultaneously in two countries, so we are making history,” said Global Football President Patrick Steenberge. “Germany and Austria are the hotbeds of American football in Europe and we are excited to have two traveling teams playing two prominent and prestigious opponents on Sunday.”

Claremont-Mudd-Scripps from California will face the Austrian National Team in the Turkish Airlines Charity Bowl as part of a nine-day overseas tour organized by Global Football, and will face a stern test at the Hohe Warte Stadium in Vienna. Augustana College was defeated 7-0 by Austria in 2010 and the following year Rose-Hulman edged a thrilling Charity Bowl clash 35-34.

The Austrians are preparing to host the European Championships of American football, which will be held in St Polten, Graz and Vienna from May 30 to June 7.

Just 420 miles to the west and across the border, Southwestern University from Georgetown, Texas, will face the Stuttgart Scorpions of the German Football League. The Scorpions opened the new 2014 GFL season with wins over the Munich Cowboys (42-9), Franken Knights (66-52) and Saarland Hurricanes (24-14) and currently top the GFL South Division in a domestic league that is considered the most competitive in Europe.

Numerous links exist between the Stuttgart Scorpions and Southwestern University. The Pirates’ Associate Head Coach/Defensive Coordinator Tom Ross was head coach for the Scorpions for two seasons, and defensive Backs Coach Bill Kriesel played for the Scorpions from 1998 to 2001.

Since 1996 Global Football has created and produced American football games and events in 21 different nations around the world and is in the process of organizing tours in 2015. Global Football will hold events in Austria, the Czech Republic, Germany, Greece, Ireland, Italy, Mexico, Spain and the United States in 2014, including the Global Ireland Football Tournament spectacular in Dublin. For more information contact Patrick Steenberge: Tel: 817-219-7274 / Email: Patrick@GlobalFootball.com