Global Football has announced an experienced coaching staff to work alongside head coach and defensive coordinator Don DeWaard as Team Stats & Stripes prepares to head to Mexico for the sixth annual Tazón de Estrellas (Bowl of the Stars).

For the 17th time since Global Football first took standout football players south of the border in the original Aztec Bowl, a NCAA Division III all-star roster, known collectively as Team Stars & Stripes will take on the CONADEIP All-Stars in the Tazón de Estrellas in Mexico on December 20.

Team Stars & Stripes will be led for a third time by unbeaten head coach Don De Waard, the defensive coordinator at Central College and he will be assisted by two returning coaches, Joe Austin of Southwestern University and Jim Catanzaro from Lake Forest College. The trio tasted victory with the American select team in 2012 and 2013.

“It is an honor to be coaching for team Stars and Stripes,” said Coach Hafner. “The Tazón de Estrellas is a great opportunity to highlight Division III football at its best. Many of the best players across the United States will come together for a chance to represent small college football against a quality opponent. This is a wonderful way for these young men to finish their great college football careers on a grand stage in Pueblo, Mexico. I am excited about the opportunity to coach with these great players and coaches.”

“Every December it is an honor to work with some outstanding men who will coach and lead select Division III senior ambassadors as they experience Mexico for a full week and then compete against their top players,” said Patrick Steenberge, President of Global Football, joint organizer of the Tazón de Estrellas. “With all that is involved this event is totally unique in college football.”

Division III coaches wishing to nominate graduating college seniors deserving of an opportunity to represent their school and country in Mexico should contact John Roslien: RoslienJ@central.edu

Don DeWaard – Central College – is a veteran of previous Tazón de Estrellas and its predecessor the Aztec Bowl. In 2012 he took over the head coaching responsibilities from former Weidner College head coach Bill Manlove, who was at the helm from 2009 to 2011, and led Team Stars & Stripes to a 32-15 victory in Guadalajara and a 29-7 win in Monterrey in 2013. De Waard is in his 33rd year on the Central staff and is the team’s defensive coordinator. He is a 1982 Central graduate and former Dutch player. In 2000, the American Football Coaches Association named De Waard the NCAA Division III Assistant Coach of the Year. He was honored at the AFCA convention in Atlanta, Ga. in January 2001.

Joe Austin – Southwestern University – was named Head Football Coach in February 2012, charged with reinstating football at a school that had not competed in the sport for more than 62 years. Austin has coached with Team Stars & Stripes since 2010. He came to Southwester after transforming Hanover College’s football program in a short time frame. In three years at Hanover he took a team that was in a decline to a rising star in the Heartland Collegiate Athletic Conference, finishing in second place the last two seasons. Both the 2012 and 2013 seasons saw 13 Pirates earn a spot on the SCAC Academic Honor Roll.

Jim Catanzaro – Lake Forest College – was named the 2012 Midwest Conference Coach of the Year, and has led the Foresters to a 16-4 record the last two season including the 2012 Midwest Conference Championship. In 2011 his team set or tied 26 school records, including single-season team marks for points and yards per game. Catanzaro came to Lake Forest from NCAA Division II Wingate University, where he was the defensive line coach for three seasons. Catanzaro serves on the Board of Directors for the Lake County Fellowship of Christian Athletes, the American Football Coaches Association Power of Influence Golf Outing Committee, and with the Coalition Against Sexual Misconduct at Lake Forest College.

Aaron Hefner – Luther College – is in his second year as head coach, having taken over the Norse program after serving seven years as the offensive coordinator at William Penn University (Iowa). During his tenure at William Penn, the Statesmen captured two Mid-States Conference championships, and made the NAIA National Playoffs. His offensive teams were ranked in the top-five in the nation from 2008-12 and set the NAIA single season rushing record with 4,476 yards in 2010. Prior to joining the William Penn staff, he was the head coach at Republic High School (Mo.). 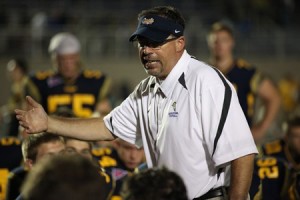 Rob Cushman – Augustana College – finished up his third season at the helm of the Augustana program in 2013, finishing the campaign with a fourth place finish in the College Conference of Illinois and Wisconsin and a 5-5 (3-4 in CCIW) record overall. His latest season saw the Vikings perform very steadily, with Augustana never dropping below .500 on the season. Cushman served as defensive coordinator for the Vikings in the 2008-2010 seasons. He was named head football coach in November 2010. Augustana is Cushman’s third head coaching job in a career that began in 1979 and has taken him to Eastern Oregon University and Feather River Community College in Quincy, Calif.

John Roslien – Central College – came to Central as head athletic trainer in 1986, becoming the athletic training education program director in 2003. He is also an associate professor of exercise science. Has served as Player Personnel Director for Team Stars & Stripes for all 17 years. He was inducted into the Iowa Athletic Trainers Society (IATS) Hall of Honor in 2007 and is a past president of the organization. Under Roslien’s leadership Central’s athletic training education program was granted accreditation in 2004 from the Commission on Accreditation of Athletic Training Education (CAATE). The Central staff has grown to include three other certified athletic trainers and during his tenure, 56 program graduates have earned CAATE certification as athletic trainers.

An exciting history… The Tazón de Estrellas and its forerunner the Aztec Bowl have produced a series of exciting games and established a fierce but friendly rivalry between the Americans and Mexicans. The hosts won 24-12 in 2009 before Team Stars & Stripes leveled the series with a 48-7 victory in Toluca in 2010 and the CONADEIP All-Stars won by a margin of 45-27 in 2011. It was the turn of the Americans to triumph 32-15 in 2012 on the head-coaching debut of De Waard, and a 29-7 win in 2013 established a 3-2 series lead.

More than just a game… The players and coaches will travel to Mexico for seven days, with two-a-day practices and an opportunity to explore the local region and experience a different culture. The visit also focuses on community service projects, with previous initiatives including clearing an area of land to benefit an impoverished neighborhood, creating a play area for children, and holding a football clinic for local youngsters.

Hosts and opponents… The Americans will spend seven days in the colonial city of Puebla and will face the premier players from across the nation from the CONADEIP Conference at El Tempo Del Dolor (Temple of Doom Stadium) at Universidad De Las Americas Puebla (UDLAP). American Eric Fisher, who won the 2010 CONADEIP championship with UDLAP and led the hosts to a 45-27 win over Team Stars & Stripes in 2011, returns to coach the Mexican all-stars.

Quotable… “Being selected as a member of this coaching staff is always an honor,” said Southwestern University coach Joe Austin. “This is my fifth selection and second straight appointment as the offensive coordinator and I take the responsibility very seriously. Global Football provides these student-athletes with a wonderful experience and the men I get to work with as coaches and administrators are committed to doing well on the field while enhancing the player experience. And, of course, it is always a rush to represent our nation, in our native game, in a foreign country.”

Giving back… The Tazón de Estrellas is the focal point for the Global Football Foundation, a 501(c)(3) non-profit initiative, which assists athletes in meeting the expenses associated with traveling overseas to realize their dreams of competing against other American football enthusiasts and experiencing different cultures. The foundation allows potential benefactors to make charitable donations to offset costs that might otherwise prevent the student athletes from undertaking the trip of a lifetime. To inquire about making a donation to the Global Football Foundation to assist student-athletes, please contact Patrick Steenberge at Patrick@GlobalFootball.com or 817-219-7274.

For more information regarding Global Football tours and events and to reserve an overseas visit in 2015 and beyond, contact Patrick Steenberge: Tel: 817-219