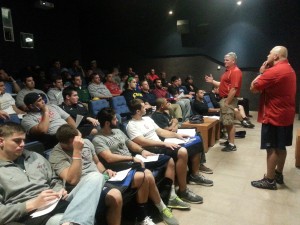 The 52 seniors from 27 Division III schools across the United States representing Team Stars & Stripes in the fifth annual Tazón de Estrellas (Bowl of the Stars) have arrived in Monterrey to prepare to face the CONADEIP All-Stars on Saturday.

The all-star team of NCAA non-scholarship student-athletes will play what for most will be their final game of competitive football in the 36,000-capacity Estadio Tecnológico on the Tec de Monterrey campus on Saturday, December 21, kickoff 1pm CT.  The game will air live at the website www.Terra.com.mx with commentary in Spanish language.

“It is always a great moment when the team comes together for the first time and bonds and leaders start to emerge,” said Global Football President Patrick Steenberge.  “This week will include a good mix of practices to prepare the team to face a very competitive Mexican team, and an opportunity to enjoy local culture and customs.”

Having come together as a group at a dinner and meetings on Sunday night, Team Stars & Stripes hit the practice field on Monday morning for the first of seven sessions during the next four days.  On Thursday they will take part in a community service project and will tour the local area and will also have an opportunity to experience the sights and sounds of Monterrey on Friday.