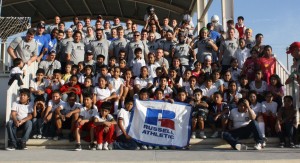 Team Stars & Stripes have named four players who will captain the all-star team of NCAA non-scholarship student-athletes against the CONADEIP All-Stars in the fifth annual Tazón de Estrellas (Bowl of the Stars) this Saturday, December 21.

The game will air live with commentary in Spanish language at the following link: http://deportes.terra.com.mx/en-vivo/19870/

Four players have been named as captains:

“The team is excited and ready to play on Saturday,” said Global Football President Patrick Steenberge.  “As has been the case every year when we bring Team Stars & Stripes down to Mexico, we have a fine group of student athletes who have enjoyed a week of bonding as a team, experienced the local culture and volunteered in the local community.  The captains were chosen for the leadership they have shown this week and there were several other worthy candidates.”