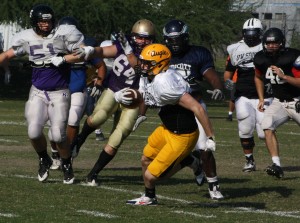 Team Stars & Stripes wrapped up their final practice before facing the CONADEIP All-Stars in the 36,000-capacity Estadio Tecnológico on the Tec de Monterrey campus on Saturday, December 21, kickoff 1pm CT.

The a coaching staff has been impressed by the 52 seniors from 27 Division III schools across the United States representing Team Stars & Stripes in the fifth annual Tazón de Estrellas (Bowl of the Stars), a game that will air live at the website www.Terra.com.mx with commentary in Spanish language.

“We have 11 defensive linemen from 10 different schools, so we have a nice range of talents and backgrounds, said defensive line coach Jim Catanzaro from Lake Forest College.  “We have a nice balance of tackles and ends.  Our guys are tough up the middle against the run and are good pass rush guys on the edge.

“We will run mostly a 4-3, but a little bit of 3-4.  We have put in a full package of stunts and twists and the guys have worked very hard to pick it up.  If we play aggressive and disciplined on Saturday, we should be just fine.”

Offensively, Team Stars & Stripes will rely on versatility to break down the Mexican opposition, as wide receivers coach Kyle Sweeney from Claremont-Mudd-Scripps explained, saying: “We only have four true receivers and we have a kicker that has played receiver, so we are a bit limited in numbers.  We also have a tight end, so we are able to use all of the formations and packages.  All of the guys are big, strong, talented kids.  We are reading coverages and adjusting routes on the go and they have all picked things us quickly.  I am very encouraged in their progress in the first few days.”

Offensive line coach Eric Raeburn from Wabash College also faces challenges up front and added: “We only have eight offensive linemen, so it will be a challenge.  Everyone will need to play two positions, so we have depth everywhere.  The challenge will not just by physically, but mentally. We want enough scheme to be ready for everything, but simple enough that we will be able to execute.”

Defensive backs coach Joe Adam from Elmhurst College believes it is on his side of the ball that Team Stars & Stripes will have an impact.  He added: “I feel like we are in good shape in the defensive backfield.  We have eight players, four DBs and four corners and all of them have played similar schemes to what we are running. We have installed 2-deep zone, cover, 2, cover 3, cover 4 and man defenses.  We have different coverages and different disguises.  Lining up properly based on the offensive formation is the biggest thing right now. Our guys are picking up what we want to do very quickly.”

Playing against his own country…

CONADEIP All-Stars running back Jimmy Potempa will find himself in the odd position of playing against his native country on Saturday.  Despite lining up for the Mexican host team, Potempa hails from Illinois.

The CONADEIP team is after all a collection of players from the nation’s top private universities and Potempa plays for UDLAP.

After walking on at Michigan, Potempa found himself surplus to requirements after a change of coaching staff and transferred to Eastern Illinois, also lining up as a proficient slot receiver.  Once his college football career seemed over, Global Football President Patrick Steenberge, who played at the University of Notre Dame with Potempa’s ’73 National Championship-winning father Gary, suggested looking south of the border to continue his education.

Steenberge recommended Potempa to UDLAP head coach Eric Fisher and that led to three more years in school and on the gridiron and Potempa has since studied for his MBA and now speaks fluent Spanish.

Central College defensive lineman Danny Samson is no stranger to international travel having visited Japan with Global Football in 2009.

The Iowa native was part of the Under 19 Team Stars & Stripes roster that played against a Japan Under 19 team preparing to play in the IFAF World Championships where they won the bronze medal later that year, finishing behind only USA and Canada.

Samson earned his trip to Japan for the game in Kawasaki when his high school coach at Baxter Community found out about the game and submitted a tape to Global Football that led to an invitation to the roster.

Team Stars & Stripes lost 38-21 to the Japanese national junior team, but enjoyed a 12-day visit combining practices with sightseeing and learning about the local culture.

“We had a great time,” said Samson.  “Knowing Global Football and my prior experience traveling with them, it was a no-brainer when I got invited to play in the Tazón de Estrellas. This has been a great experience as well.”

Team Stars and Stripes’ Endicott College kicker Dylon Rashe was born in Dublin, Ireland, and moved to Los Angeles when he was 12 years old.

He got hurt playing soccer in high school, so he kicked for the football team his senior year just for fun.  Such was his ability and enjoyment of the game that Rashe contacted the head coach at Endicott and has kicked there for four years.

Rashe has also played rugby, Gaelic football and soccer and did not play his first year of high school football game until his senior year.