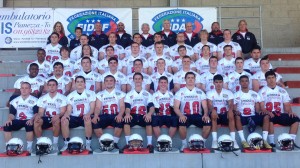 Kicker Anthony Bagliano (Eastlake North, OH), who was born with a condition known as Holt-Oram syndrome and despite having virtually no arms and enduring multiple heart conditions, kicked a 17-yard field goal for Team Stars & Stripes and also kicked off for Italy to start the game.

“It was a great game played in wonderful spirits,” said Global Football President Patrick Steenberge.  “The unofficial score was 67-7 as two local young cancer patients were allowed to run the length of the field and score an honorary touchdown while the American defense theatrically dived and missed tackles.  That was popular with the home crowd, as was the reaction of everyone when Anthony Bagliano made his field goal and celebrated with his teammates.”

Team Stars & stripes led 14-0 at the end of the first quarter through a 13-yard Nicholas Dubowski (Erie Cathedral Prep, PA) scoring run and a long dash to the end zone by Tilghman.

The Americans scored four second quarter touchdowns and a safety to lead 44-0 at halftime.  A 44-yard interception return by Steve Clarke (St Edward, OH) was followed by a safety forced by Stephen Palmer (Sabino, AZ) before Alec Bean (Mercer Island, WA) lofted a 44-yard touchdown pass to Tilghman to open up an unassailable 30-point advantage.

Strouss scrambled six yards to pay dirt and Camden Wilka (Tucson magnet, AZ) picked up a fumble to charge 20 yards for a touchdown.

Bean threw another touchdown, this time over 12 yards to Matt Levy (Germantown Academy, PA) before Bagliano lined up again in the fourth quarter and landed his field goal from out on the right hash marks.

Chris Overton (Cleveland Glenville, OH) rounded off the scoring within the final minute, rushing 8 yards to score and kicker Luke Bakewell (Salpointe Catholic, AZ) tagged on the final extra point, as he and John Chereson (Cathedral Prep, Erie, PA) shared those duties all day and were perfect eight times.

John Pena of Salpoint Catholic, AZ, was named Global Ambassador for the visit to Italy and Matt Levy of Germantown Academy, PA, was named Most Valuable Traveler.