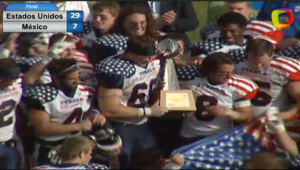 Team Stars & Stripes beat the CONADEIP All-Stars 29-7 to win the fifth annual Tazón de Estrellas (Bowl of the Stars) at the 36,000-capacity Estadio Tecnológico on the Tec de Monterrey campus.

Tight end Anthony Richie of Grove City College caught two touchdowns and Lawrence University quarterback Luke Barthelmess proved a constant first half threat on the ground and in the air as he also raced into the end zone to score.

Both sides punted away their opening possession before the 52 seniors from 27 Division III schools across the United States representing Team Stars & Stripes drove 89 yards to open the scoring.

With Barthelmess under center, the Americans recorded an initial first down through a Brian Fliess (St Norbert College) rush then a Nikko Sansone (DePauw University) run, Barthelmess run and a pass to Fliess consecutively moved the chains rapidly downfield.

A first down by penalty aided the cause before Barthelmess hit Josh Wise (Kalamazoo College) in double coverage to move the ball to the Mexicans’ 14-yard mark.  A pass to Jake Larioza (Kalamazoo College) moved the ball to the nine-yard line and from there Barthelmess was able to rush up the middle to open the scoring and take a 7-0 first quarter lead after Dylan Rushe (Endicott College) tagged on the extra point.

The CONADEIP All-Stars again went three and out before Team Stars & Stripes went to work on another scoring drive, again starting deep in their own territory at the 12-yard mark.

The running of Sansone, Barthelmess and catches by Fliess and Richie led to a fourth down attempt that came up short, but a pass interference call kept the drive alive.  Barthelmess was sacked by Rodolfo Villarreal and the Americans had to settle for a 26-yard Rushe field goal and a 10-0 lead.

With the hosts backed up in their own red zone, linebacker Ben Manwaring (Grove City College) came up with an interception as quarterback Miguel Chen was pressured.  A trick play opened a 16-0 lead as Barthelmess threw a lateral pass to Fliess and he tossed a pass to a wide open Richie for a touchdown, but the extra point was no good.

The CONADEIP All-Stars set about a hurried drive to close out the half and put seven points on the board for their determination.  Having started at their own five-yard mark, the Mexicans went to the air as Robin Gonzalez, Mauricio Salazar and Jean Claude Madin reeled in impressive catches.  Chen eventually hit Leopoldo Lara in the end zone to reduce the halftime deficit to nine points.

Hanover college quarterback Dexter Britt opened the second half but after almost connecting with Fliess in the end zone was intercepted on the first Teams & Stars possession.  After the CONADEIP All-Stars went three and out, Barthelmess returned at the helm and his ability to take off and run took the ball into the hosts territory immediately, but the drive stalled with a turnover on downs.

The Mexicans combined a series of runs with going to the safe hands of Lara before a Chen pass to Robin Gonzalez moved the ball to the edge of the red zone.  The hosts were making headway on the ground, but Chen threw up a jump ball to the corner of the end zone where there were two Team Stars & Stripes defensive backs and Kevin Hwang (Grinnell College) came down with the ball and an interception.

Juan Flores (Cornell College) took over at quarterback for Team Stars & Stripes and on a disguised play on fourth down, rushed for more than enough yards to move the chains.  That play proved the key in another scoring drive for the Americans that culminated in a pass up the middle to Richie for a 12-yard touchdown, his second of the game, for a 23-7 lead.

With Ryan Landwehr (Rose Hulman) at quarterback, Team Stars & Stripes drove downfield again with the rushing threat opening holes in the CONADEIP defense.  Sansone was the main weapon and having chipped away at yardage, took the ball up the middle, breaking tackles for a touchdown and a 29-7 lead.  Rushe’s extra point was blocked.

The hosts pressed for a consolation touchdown and had two strikes at the end zone fall incomplete as time expired.