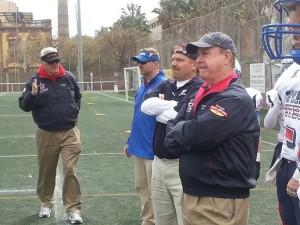 The Americans wasted no time getting on the board as Kovacs scored on an 11-yard run and Father Judge teammate Connor Pelligrini-Foley tagged on the extra point. A one-yard run by Cody Russell (Episcopal Academy, PA) meant Team Stars & Stripes led 13-0 at the end of the first quarter.

An 18-yard run by James Biggs-Frazer (William Penn Charter, PA) and successful point after opened a 20-point advantage before the hosts, whose roster included players from Barcelona, Madrid and Mallorca, hit back through a 70-yard scoring pass. The Americans scored again through a 10-yard Zach Samson (Baxter Community, IA) run, making the score 27-6 at halftime.

“A special thanks goes to former Barcelona Dragons national coach Marcos Guirles for his amazing work in putting together the Spanish team and all the game logistics,” said Global Football President Patrick Steenberge. “It is always a pleasure to work with Marcos. I look forward to returning to Spain this June with Rose Hulman College when they tour with Global Football.”

The game between Team Stars & Stripes and the Spanish youngsters was watched by the Presidents of the American football federations of Serbia, France, Italy and Spain.

The Global Bowl series has been contested previously in Japan (2008 and 2009), France / Belgium (2010), Germany (2011) and Italy (2012 and 2013). Team Stars & Stripes boasts an all-time 4-2 record, but it is the cultural experience and opportunity to enjoy the sights of Barcelona and the Catalan region that are as much a focus of the trip as time spent on the football field.