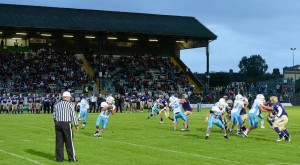 The famous GAA Pairc Tailteann stadium in Navan hosted two GIFT 2012 games as Oak Park High School from Manitoba and Villanova College from Ontario kicked off the event at 4pm, playing Canadian rules. The curious home crowd, many of whom had never seen a game played on the gridiron, were then treated to Notre Dame Prep from Arizona taking on Father Judge from Pennsylvania.

Canadian ambassador to Ireland Loyola Hearn was joined by former University of Notre Dame and Green Bay Packers offensive lineman Mike McCoy to welcome the teams from Canada and the United States, as they performed the pregame coin toss.

Oak Park ran out 18-9 winners in a close contest against Villanova College, while Notre Dame Prep were 20-6 victors over Father Judge. 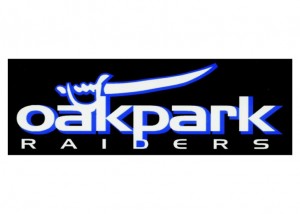 An ability to limit penalties and force their opponents into errors provided Oak Park High School with the perfect platform as they beat Villanova College in an entertaining clash at Pairc Tailteann, Navan.

Oak Park, who suffered only one defeat in 2011, continued their winning ways with a solid display against a Villanova outfit, who had major attacking threats in Alexander Montini and Anthony Divito, but struggled to break the excellent Oak Park defensive line.

The excitement was at fever pitch for the first-ever Canadian rules game played on foreign soil and after a shaky opening, which saw them concede the first two points of the game, Oak Park settled and dominated the scoreboard. From the opening kickoff Villanova were slow to attack the ball and Oak Park instantly retrieved their own kick to surprisingly start the game on the offensive despite having lost the toss.

However, with very little gain on the first drive Villanova took possession, but they too struggled to trouble the end zone in their first couple of plays. After a couple of three and outs for either side, punter Domenic Battistella kicked through the end zone and under Canadian rules that got Villanova off the mark with a Rouge point after seven and a half minutes play. 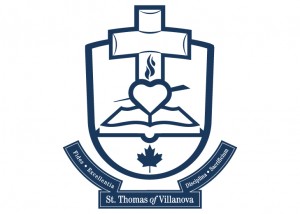 After a couple of snaps from both centers that sailed over quarterbacks heads, Battistella doubled that lead to 2-0 with another punt that ran through the end zone to end the first quarter 2-0 to Villanova.

After going three and out in the second quarter Villanova punted to within two yards of the endzone where Austin Dupont recovered.

That set up the first touchdown of the day with Kurtis Parson finding Xavier Prime in the endzone on the second down. Adrian Frost kicked the extras to give Oak Park a 7-2 lead less than two minutes into the second quarter.

Villanova’s David Colelli dropped two interceptions from wild throws by Parsons as Oak Park were let off the hook late in the second quarter and they took advantage of those let offs when Bradley Olivara’s 25-yard run set up a series of downs on the 17-yard line for Oak Park.

After a flag on a play Oak Park were rewarded with a first and goal on the one-yard line and in the second down TJ Wright ran in unopposed. A poor snap for the extras was gathered by Tyler Irvine and he ran in for two points to make it 15-2 31 seconds before the half-time and that’s how it stayed to the break.

The second-half was lived up when Andrew Sarnese completed a 55-yard pass to Anthony Divito, but for the second time in the game good Villanova offensive play was brought back for an offside foul on the play.

Penalties continued to be the thorn in Villanova’s side as Oak Park were able to shut them out on downs.

The slippery Irish turf also caused Villanova problems as they lost their footing under receptions and struggled to hold a toe in the ground as the third quarter ended without a score and Oak Park still 15-2 clear.

Scores were scarce in the final quarter too, but after going just four yards in two downs, Oak Park kicker Frost kicked a 28-yard field goal to stretch their lead to 18-2 with just 1.38 left on the game clock.

One of the plays of the day saw Villanova’s back up quarterback Vincent Luccisano throw a 30-yard pass to Peter Williams who was stopped on the one yard line and on their second attempt Luccisano handed off to Alexander Montini who capped a fine effort by running in Villanona’s only touchdown. David Colelli added the extra point to close the scoring on a hugely entertaining contest.

Notre Dame honored the memory of their former head coach Scot Bemis who passed away from cancer in January by opening their regular season with a convincing victory over Philadelphia’s Father Judge High School at Pairc Tailteann, Navan this evening. 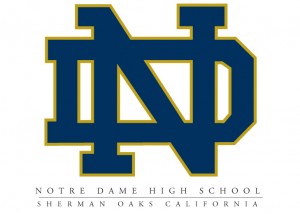 Running Back / Linebacker Luke Taffuri was the star of the show for Saints as he ran in two touchdowns, made five tackles and was the inspiration behind the victory.

After driving so close in one of their early series of plays Notre Dame went for it on fourth down and threw 25 yards to move to first and goal after just four minutes. In the first play of the series Taffuri found a gap and ploughed through for the opening touchdown. Sean O’Brien’s point after try was blocked, but Notre Dame still burst into a 6-0 lead.

After a series of three and outs Notre Dame quarterback Nick Duckworth fumbled when sacked by Father Judge’s Kyle Douglas, and that turned over possession to the Philly school on the Notre Dame 33 yard line. On fourth and one, Conor Foley kicked the 29-yard field goal attempt to close the gap to 3-6 with 1.11 left on the clock in the opening quarter and with no more scores in the opening 12 minutes, Father Judge took a 6-3 lead into the second quarter.

After taking three series of first downs to move to 52 yard line, Samir Bullock broke for a 25-yard burst to move Father Judge to the 22-yard line and after a face mask penalty, Judge moved to first and goal with eight minutes remaining in the half. 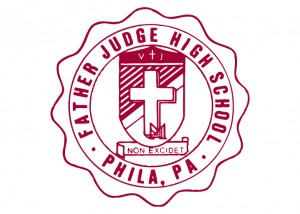 However, Father Judge failed to take advantage of the drive that saw them move from their own 15 yard line to first and goal as the went to field goal and Foley’s effort sailed wide. Both sides traded interceptions with Jordan Sclueter’s proving decisive as a big 39-yard catch by Grant Martinez was followed by a big carry by Sclueter to move play to a first down on the 26-yard line.

Patience was the name of the game from Notre Dame as they benefitted from a couple of penalty calls including a facemask call and a pass interference judgment. A massive pass to Bailey Jones brought play to first and goal where the outstanding Taffuri ran in for his second touchdown and O’Brien added the extra point to hand Notre Dame a 13-3 lead at the break.

Three minutes in the second half Taffuri showed his electric pace and a clean pair of heals to break from his own 40-yard line and set up first and goal on the six yard line for Notre Dame.

In the red zone Notre Dame again punished Father Judge with Duckworth finding Martinez uncovered in the endzone. O’Brien added the PAT as Notre dame stretched their lead to 20-3. On the next play Judge went on the offensive with Ryan Mackiewicz picking out Max Pascavitch with a 45-yard pass. Pascavitch was collared late and from the penalty Fr Judge set up on the 12-yard line to try for their first touchdown.

However that was as far as they got as Taffuri picked off a brilliant interception on the one-yard line to turn the ball back over in Notre Dame’s favour and effectively break the spirit of Father Judge High school. Father Judge had to settle for a Foley field goal to close the gap to 6-20 with 8.22 remaining.