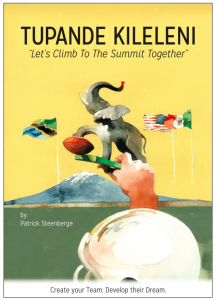 The story of the 2011 Global Kilimanjaro Bowl – the first college American football game ever staged in Africa, as told from the viewpoint of event producer Patrick Steenberge in Tupande Kileleni: Let’s Climb to the Summit Together – is now available to download as an e-book or to order as a paperback.

Student-athletes from the United States and Mexico showcased the sport they love to an eager crowd of 12,000 intrigued Tanzanians, key political leaders and a worldwide TV audience, then bonded while serving the local community and ascending the iconic Mount Kilimanjaro. This dream came true through leadership, teamwork and international cooperation among visionary, dedicated men and women in Tanzania, Mexico and the United States.

“In January 2010 Coach Chris Creighton of Drake University came to me with his dream, to take his football team to Tanzania to compete, to serve, to experience and to summit Mount Kilimanjaro,” explains Steenberge. “On May 26, almost 18 months later, 134 of us stood together on top of the world’s tallest freestanding mountain, as one team.

“This story should inspire everyone who reads it to dream, believe, persevere and work in cooperation with others. As the sub-title reads, it will motivate folks to Create your Team; Develop their Dream.”

The e-book can be downloaded or a paperback copy ordered through Tate Publishing at www.tatepublishing.com/bookstore. Tupande Kileleni will be available in bookstores and other online sites on March 10. Proceeds from book sales will go to fund future fresh water wells in Tanzania’s Singida Region through the Global Football Foundation, with the first well having been funded and completed in 2013. 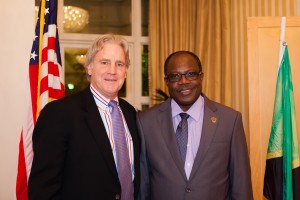