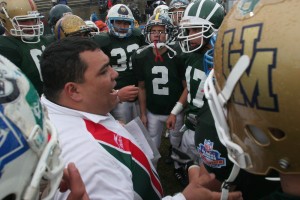 Global Football’s international initiatives have often featured teams, players and coaches from Mexico, where American football thrives and is the focus of many great games and events. A familiar face has played an integral part in three different Global Football ventures over the years.

Juan Gonzalez first shook hands with Global Football President Patrick Steenberge during the NFL Global Junior Championship, a tournament that was played annually in the Super Bowl host city as a partner event of the NFL season finale from 1997 to 2007. He is a veteran of 26 years of coaching American football in Mexico.

Four times the Mexican coach helped guide the fortunes of the Mexican junior national team as they lined up against opponents ranging from USA, Canada and Panama to Japan, Russia, France, Germany and a Team Europe all-star squad. Success in his native Mexico, having won six championships with his team, the Redskins, earned him the role of head coach of the national team for the GJC in Houston, Jacksonville and Detroit.

Gonzalez was an assistant coach in Cancun in 2003 when Mexico’s finest college players defeated their American Division III counterparts 34-31 in a thrilling Aztec Bowl, the annual Global Football game that has become the Tazon de Estrellas.

And in nurturing three age groups of developing Mexican players, Gonzalez is currently in Florida coaching one of the Mexican teams participating in the International Bowl games at the Pop Warner Super Bowl. It is the third time he has taken a team to the ESPN Wild World of Sports on the Disney complex.

“Attending a Global Football event is always a great experience for me and the kids,” explained Gonzalez. “When Patrick and I work together it is always for the enjoyment of the kids taking part.”

This week those young football players come from Mexico City, where these days Gonzalez coaches the defensive line of Aguilas Blancas of the National Polytechnic Institute in Mexico City. In addition to coaching his team at the Pop Warner Super Bowl, he also organized the participation of those from Toluca and Queretaro.

“It is great to bring them to play against other countries and I know the importance of this event,” he added. “Just like at the Global Junior Championship and in the Aztec Bowl, we all have the opportunity to meet people of other cultures and to develop the abilities of the players and grow ourselves in terms of coaching.

“This whole week is fantastic because of the experience to play with other countries, to meet people and of course to enjoy the Disney parks.”