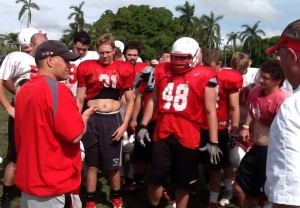 Wabash College highlighted their visit to Panama with Global Football with a 56-6 victory over a Panamanian All-Star team at the Estadio Luis Ernesto Cascarita Tapia.

The Little Giants forced their opponents into a flood of turnovers and special teams errors as the Little Giants triumphed and ran out convincing winners in front of 1,200 spectators.

Wabash College won the toss and embarked on a 70-yard drive that culminated in a Tyler Holmes fumble, which was recovered in the end zone for a touchdown by Kevin Bennett.  Glenn Doughty nailed the first of eight extra points to open an early 7-0 lead.

A long Panama drive resulted in missed field goal and Wabash doubled its lead when Mason Zurek scored on a 3-yard touchdown run.

Panama’s fumbled kick return was recovered by Ollie Baur to set up a Tyler Holmes scoring run and a 21-point advantage.  It was a similar story when a Panama punt was returned 50 yards by Houston Hodges, but the drive ended there as Ricardo Arosemena claimed an interception for the hosts.

Cody Buresh recovered a fumble and Wabash capitalized with another Zurek touchdown run and then Matt Beard returned an interception for a 35-0 halftime lead that was preserved only when the Little Giants halted the Panamanians on fourth down as the half ended.

Jim Walsdorf scored a touchdown on his first-ever reception before a pick-six by Justin Woods opened the gap to 49 points.

Jon Bush then blocked a punt that was recoved by Chris Broecker and a Wabash one-yard quarterback sweep by Mike Putko completed the scoring for the visitors.

The shutout was denied when Tomas Altamirano, a 23-year-old attorney from Panama City, returned an interception 70 yards to score his team’s solitary touchdown.