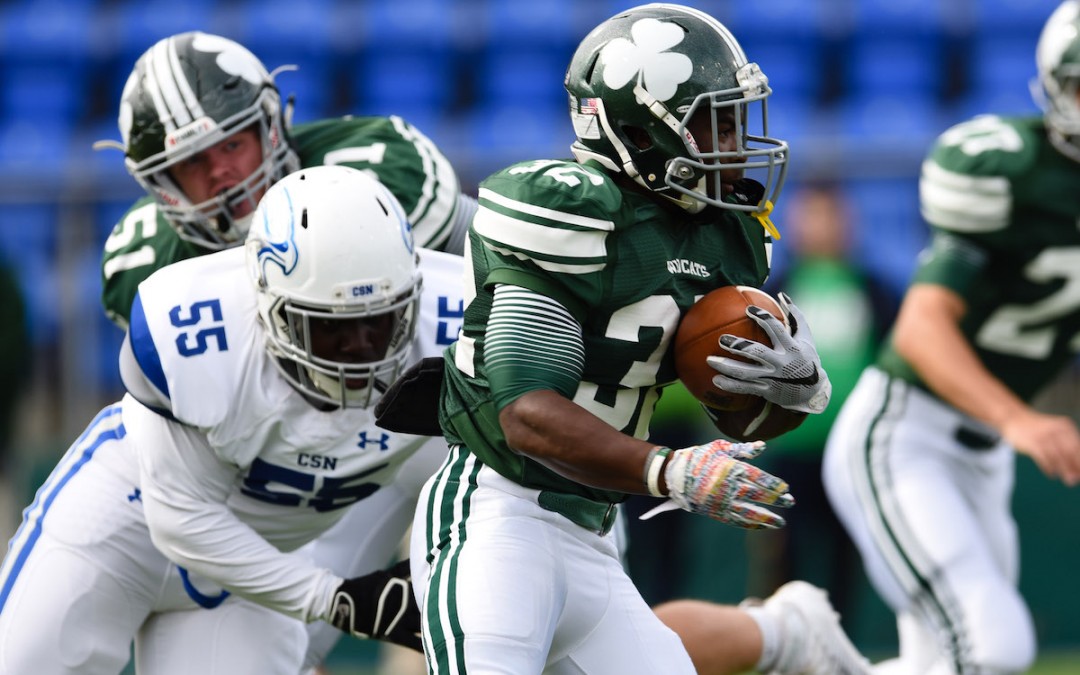 The dual Westminster School rushing threat of Isaiah Malcolme and Ian Ude proved too strong for a spirited Community School of Naples team that twice led the opening game of the American Football Showcase Dublin in a 42-21 victory for the reigning Georgia State AAA champions.

Ude and Malcolme each scored three touchdowns, the latter producing a 25-yard interception for a score from his impressive repertoire to add to two on the ground at Donnybrook Stadium in Ireland’s capital.

The Seahawks lived with their opponents until midway through the third quarter when a 21-14 lead evaporated as Ude and Malcolm added a pair of touchdowns each.

“We came out a little cold and perhaps underestimated our opponent a little and found ourselves behind early,” said Westminster coach Gerry Romberg. “We made some adjustments at halftime and we executed well and our running game was exceptional.”

Malcome, who rushed for 200 yards on 18 carries, scored the first touchdown of the day as he used blistering speed around the outside to race to a 36-yard touchdown and a 7-0 early lead after a successful extra point by Jack Schafly. Malcolme ran for three consecutive first downs on the scoring drive and quarterback JD Falconer hit Nance Hill for a crucial 32-yard gain to breach Naples territory before a no-huddle offense caught the Seahawks out and led to the score.

When the Seahawks hit back to tie the game with 7:10 remaining in the half, it was the Cooper Weiss show that brought the game level.

Quarterback Weiss, who had almost claimed an interception when lining up in the secondary, completed the first pass of the second quarter, then eluded all tacklers on a mazy 23-yard scramble two yards into the opponents’ half. Another Weiss dash, this time straight up the middle earned another first down that erased the memory of a delay of game call. Then the signal caller hit the equally impressive Joe Lang for a 27-yard gain at the Westminster eight-yard mark, before rushing untouched into the end zone from three yards out.

Bearing down on the two-minute warning, a Weiss to Daniel Zuloaga connection and a short pass to Robert Devito edged Naples close to the red zone again. Christopher Murphy fumbled a Weiss pass having done enough to gain a first down, and Westminster recovered. But the Seahawks got the ball back immediately as Israel Anis fell on a poor Westminster snap and two plays later, a six-yard Weiss to Robert Devito pass earned Naples a 14-7 lead after a second successful Adam Harris kick.

“He’s a college-level athlete and he put on a heck of a show today,” said Seahawks head coach Paul Selvidio of Weiss, who completed 23 of 30 passes for 179 yards and 2 touchdowns and scored once on the ground himself.

The Wildcats raced downfield in reply, using the remaining 32 seconds to great effect, but ended the half with a missed 47-yard field goal attempt by Schafly.

Westminster needed little over a minute of the second half to draw level. Ude, who ended the day with 143 yards on 9 carries, found space to the outside and raced unchallenged down the left sideline for a 40-yard touchdown.

The Seahawks simply hit back. The highlight of a 77-yard scoring drive was Cooper’s pass to Owen Stayer, whose determined effort after the catch earned 25 yards. Cooper then picked out Zuloaga 23 yards from pay dirt and despite fighting off pass interference, the Seahawk came up with the ball and a 21-14 lead.

Westminster unleashed their rushing tandem in reply and Ude breached the end zone from two yards out after his partner Malcolme had carried the workload to even the score at 21-21.

Naples drained the remainder of the third quarter on a long drive that threatened but stalled at the edge of the red zone when a 37-yard Harris field goal flew wide right of the uprights.

Then came a 25-yard Ude run and a Malcome interception return over the same distance for a touchdown that turned the tide before Malcome added the game’s final score on an eight-yard dash.

“We just ran out of gas,” explained coach Selvidio. We played really tough against a good football team and they caught us cold in the second half. We gave all we had, but we couldn’t match them for depth over four quarters.”