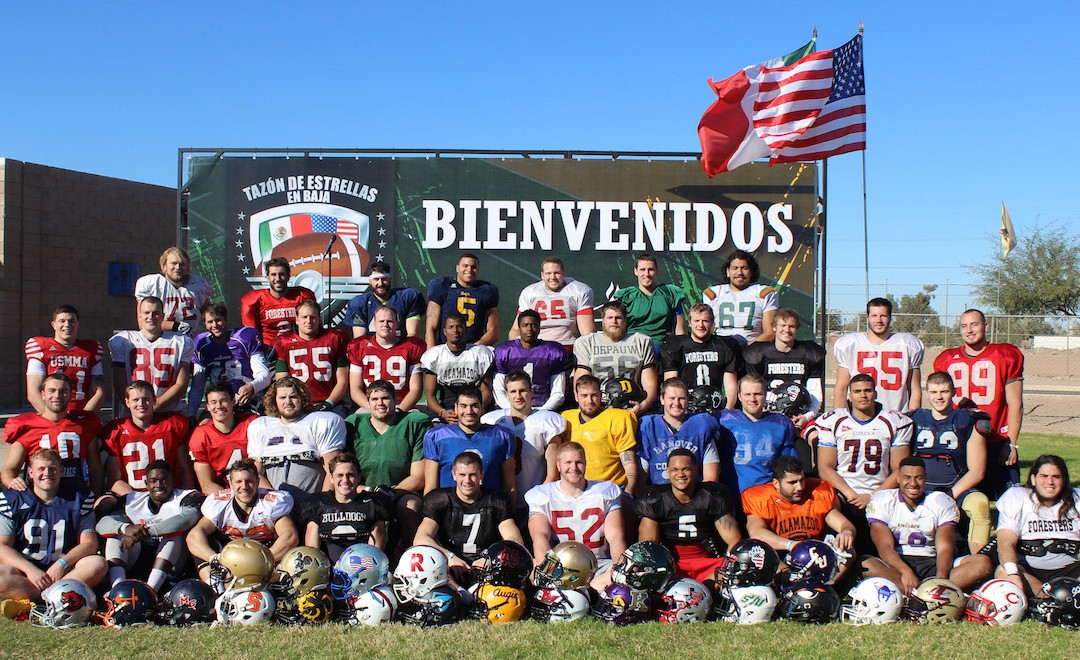 An experienced coaching staff will lead Team Stars & Stripes against the CONADEIP All-Stars at the eighth annual Tazón De Estrellas (Bowl of the Stars) in Mexicali on December 17.

Division III coaches who believe they have graduating college seniors deserving of an opportunity to represent their school and country in Mexico may nominate athletes for Team Stars & Stripes. Nominations should be sent to Director of Player Personnel & Football Operations John Roslien: RoslienJ@central.edu.

“I vividly recall getting the phone call in 1996 from legendary Coach Ron Schipper asking me – rather demanding – that I help him create a very special postseason opportunity for worthy D3 senior players. I am proud to work with such a dedicated and talented group of men who will volunteer their time and energies to lead this year’s squad in Mexico. It really is a testimony to Coach Skip and all those who have coached, worked and played in this game over the past 19 years.”

Joe Austin has served as the team’s offensive coordinator since 2013. Austin is in his fourth year as the head coach of Southwestern’s football program. He was hired in February 2012, as the program was reintroduced to campus following a 63-year hiatus. The Pirates have continued to grow in each of the three campaigns led by Austin. Last year, Southwestern won two games, both of which came on the road. A total of 13 Pirates earned All-Southern Collegiate Athletic Conference (SCAC) honors, including eight first-teamers. So far in 2016 he has posted a 3-2 record.

Prior to Southwestern, Austin transformed the program at Hanover College through four seasons as the head coach, helping the team to back-to-back runner-up finishes in the Heartland Collegiate Athletic Conference in the final two campaigns. Austin spent two years as the offensive coordinator at the University of Dubuque, where he helped the program to back-to-back winning seasons for the first time in 28 years.

Rob Cushman made his debut on De Waard’s staff last year. He was named head coach at Minnesota Morris in 2015 after leading Augustana College, where he served as head coach for the 2011 through 2014 seasons as well as defensive coordinator from 2008 through 2010. The Knights earned a third-place finish in the competitive College Conference of Illinois and Wisconsin (CCIW) with a 5-5 record overall in 2014. As head coach Cushman produced 22 All-Conference players at Augustana, and took his Augie team to France in 2012 with Global Football.

Cushman has experience building competitive football programs. He was the first head coach hired at Feather River College in Quincy, California, in 2002, where he created a new community college program that went 6-5 in its first year. The program’s 80 student athletes enjoyed post-season bowl invitations all five years Cushman led the program and amassed a record of 34-21.

John Storey is the head coach at Villa Angela-St Joseph High School in Cleveland and is a veteran of Global Football international travel. Storey has been a member of the high school-aged Team Stars & Stripes squad’s coaching staff for eight years on visits to Japan, Germany, France, Italy and Spain. He first traveled with Global Football in 1997 as the offensive line coach with John Carroll University, where he coached for ten years. Storey once convinced future NFL all-pro and JCU linebacker London Fletcher to try football during his sophomore year at Villa Angela-St Joseph, which tuned out to be a great suggestion.

Storey has spent 23 years coaching at VASJ and is currently in his second spell as head coach, having led the Vikings from 1991-1993 and again since 2009. He is also an accomplished wrestling coach and was inducted into the National Wrestling Hall of Fame with a record of 204 total dual meet wins from 1965 to 1991.

Mike Creaney was a teammate and roommate of Global Football President Patrick Steenberge at the University of Notre Dame and is currently coaching at Stevenson University. Lining up at tight end for the Irish, Creaney had 45 receptions for 871 yards and 5 touchdowns, including the famous Genuflect Play when he caught a two-point conversion pass from Steenberge to beat Purdue 8-7 in 1971. That play is celebrated as number 13 among the top 125 Notre Dame plays of all time: http://125.nd.edu/moments/the-genuflect-play-1971/

Head coach Don De Waard was a member of the Central College (Iowa) coaching staff for 34 years and a 1982 Central grad. De Waard retired from coaching the Dutch following the 2015 season. At the helm of Team Stars & Stripes, De Waard moved his record to 3-1 after registering a thrilling 15-14 victory with a two-point conversion on the game’s final possession last year.

John Roslien returns as Player Personnel Director for Team Stars and Stripes having been involved with the game for 19 years. Roslien joined the Central staff in 1986 and has held his current title since 2003. He is a member of the Iowa Athletic Trainers Society Hall of Honor and is also an associate professor of exercise science.