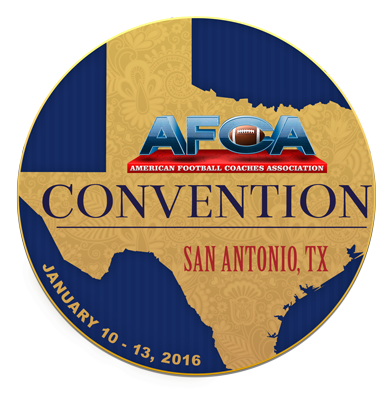 For the 18th year in succession, Global Football will feature prominently and engage with coaches from around the world at the annual American Football Coaches Association (AFCA) Convention.

The Henry B. Gonzalez Convention Center in the Alamo City hosts the 93rd annual AFCA showpiece event from January 10-13 and Global Football President Patrick Steenberge will be available to meet coaches and visitors to the Convention at Booth 7117 in the exhibit hall.

Since 1996, only Global Football has consistently provided amateur football players, coaches, families and fans the opportunity to travel and compete internationally with people of differing cultures, producing games and tours in 23 countries on 6 continents. More than 350 teams and 14,000 curious travelers have encountered a positive life-changing experience, while enjoying the ultimate team-building opportunity.

“The AFCA Convention is always the ideal spot to kick off the New Year, as it is the epicenter of football each January,” said Steenberge. “I look forward to seeing many old friends and clients with whom we have shared amazing experiences. Plus, it will be fun to meet new coaches who have dreamed of playing overseas, and are now ready to make this a reality for their players and staff. In addition, many of our international partners will be there so we can plan new events.”

The AFCA Convention provides an opportunity for coaches considering taking teams overseas a chance to talk with Patrick Steenberge and with Leo Jenkins, who coordinates European operations; John Roslien, Player Personnel Director for the Team Stars & Stripes squad that competes at the Tazón de Estrellas every December; and Sheldon Baxter and Erica Wilkerson of Anthony Travel, who handle flights and ticketing.

On sale at Global Football’s Booth 7117 will be Patrick Steenberge’s book Tupande Kileleni: Let’s Climb to the Summit Together, the unique story of how teamwork allowed student-athletes to showcase playing the sport they love at the 2011 Global Kilimanjaro Bowl. It was at the 2010 AFCA Convention that then Drake University head coach Chris Creighton and Patrick Steenberge set the wheels in motion for the first game of college American football to be played on the African continent in front of 12,000 intrigued Tanzanians, before travelers served the local community and climbed to the summit of the iconic Mount Kilimanjaro.