Why do we do what we do?

When watching college and high school teams meet on a foreign football field overseas, or peering up at the might of the Coliseum in Rome, or kicking back on a boat crossing the Adriatic Sea from Greece to Italy, the answer is obvious. These are great events and bucket-list places we are fortunate enough to witness.

But the reason we keep stamping our passports and traversing the nation year after year, is the people who participate in our events – the Global Football family.

Some of the most enthusiastic and engaging of those brethren are the longtime Notre Dame and Penn State football fanatics who have lived out their sporting fantasies through Global Football. They first lived the dream of playing at Beaver Stadium and Notre Dame Stadium through the respective fantasy camps of those two great universities. Then as a rivalry grew between them, an on-field competition was born.

The Fantasy Bowl pitched the fanatics of the Fighting Irish against the diehard Nittany Lions and those two memorable games provide our Throwback Thursday for the week of Thanksgiving, when we give thanks for some incredible friendships that have endured from these unique bowl games. 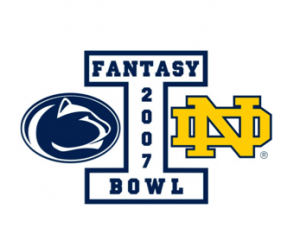 They first met on Friday, September 7, 2007, at Penn State, on Bigler East Field, in the shadow of Beaver Stadium, where the following day, the other Nittany Lions and Irish would meet before a crowd of more than 100,000 fans, who created the first ‘whiteout’ of a college game – a fan exercise that has since been replicated by many schools.

The veterans of Global Football’s fantasy camps survived a light practice the day prior to meeting on the gridiron in a game of semi-contact (we use that term lightly) flag football.

It was Notre Dame who proudly won the inaugural Fantasy Bowl with a narrow 16-15 victory. The Nittany Lions opened and finished the scoring, but 16 unanswered Fighting Irish points proved the difference.

“I’m proud of them,” said Notre Dame head coach Frank Stams, a former defensive end for the Irish. “They went behind early in the game, but played some composed football and executed plays when it mattered to win the game. It was a lot of fun to be involved.” 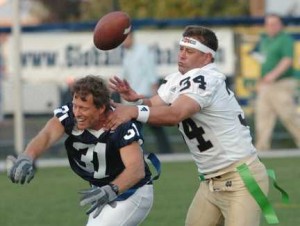 The Irish scored the only points of the second quarter when Haveard found Jeff Balitos (Nashville, TN) from three yards out and the boot of Barry increased the lead to 14-7 at halftime. The drive had started after Brian Peroni (Chesapeake, VA) had produced an interception for Notre Dame that helped earn him Fathead defensive MVP honors. 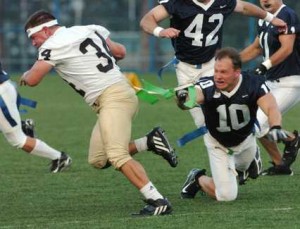 After a scoreless third quarter a safety gave Notre Dame a nine-point lead when the ball was snapped through the end zone on a punt. Penn State rallied and Garner orchestrated a drive that took the ball down to the visitors’ seven-yard mark. Garner twice hit Rosario for big gains, scrambled 18 yards himself and went to the reliable Rosario for the touchdown. A two-point conversion pass to Steve Bogush (Yardley, PA) cut the lead to a solitary point, but time expired on the Nittany Lions comeback bid.

Haveard ended the day with 20 of 27 passes completed for 215 yards and 2 touchdowns, his favorite receiver being Barry (6-69-1), closely followed by Peroni (5-58) and Joe Colgan (Chicago, IL, 5-50). Penn State signal caller Garner was 9 of 13 for 135 yards and 2 touchdowns, mainly targeting Rosario who led the team with 104 yards and a touchdown from four catches and also posted a team-best 5 tackles and 2 sacks to earn a Fathead MVP award. Fred Kim (Huntersville, NC) was the Nittany Lions’ Fathead offensive MVP as he posed a double threat rushing (4-13) and receiving (5-42). 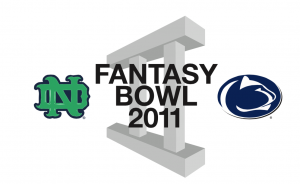 2011, the Irish won again, returning to Bigler East Field in State College to record a 20-6 victory in Fantasy Bowl II.

“They made it through without any injuries and it was another hard-fought game,” said Global Football President Patrick Steenberge of the group of college football fanatics averaging 40-plus years in age. “It looked early on like Notre Dame might dominate but Penn State fought back and used their quickness against a bigger defensive front to stay in contention.”

The Irish scored on their first two drives and held a 14-6 lead at halftime. Quarterback Mike Haveard scrambled out of trouble on third and long to hit Patrick Dolphin for a 34-yard touchdown and then scrambled for a two-point conversion on a quarterback draw. The eight-point lead was soon extended to 14 when Haveard again went to his favorite receiver Dolphin in the corner of the end zone. 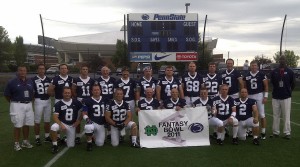 Penn State rallied and Rob Tribeck raced 30 yards on the ground on third and one, taking the ball to within four yards of paydirt. Quarterback Dustin Swartz took in a keeper from four yards out, reducing the deficit to eight points at the interval.

Penn State almost capitalized on a Doug Stewart third quarter interception at midfield but was stopped at the Irish two-yard mark on fourth down with a tied game looming. Notre Dame took full advantage with a long fourth quarter possession that was capped by a third down Haveard to Brian Pieroni 19-yard pass on a crossing pattern that gave the Irish an unassailable 20-6 lead. 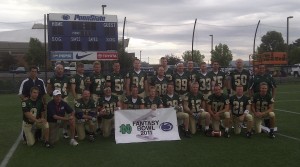 So the one question that remains as we tuck into that Thanksgiving turkey this week, is when will the two teams meet again on the fantasy football field?