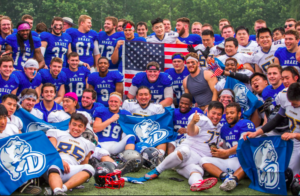 Global Football and Drake University again joined forces in 2018, this time to venture into China for a truly memorable visit that included a community service project, discovering a new culture, a football clinic for local youngsters, and a game against a Chinese all-star team.

The Bulldogs traveled to China on May 22 for 10 days and the life-changing experiences they enjoyed are captured in this summary of the Drake-China Global Ambassadors Bowl: Global Football China

“We were delighted to again work closely with Drake University and our broadening group of partners in China to enable us to attract players of all ages, as well as coaches, to become involved with this event and further develop their skills,” said Global Football Founder & President Patrick Steenberge. “Eager Chinese players and coaches watched the Drake football practices and took part in an American Football Celebration on the Saturday.”

China became the 28th country to host a Global Football event in 2017 when a high school-aged Team Stars & Stripes select squad visited for the Global Ambassadors Bowl in April, followed by the University of Puget Sound traveling to face local opposition in May.

“Global Football continues to do great work in bringing the sport of American football around the world and Drake’s visit to China is another excellent example,” said NFL China Managing Director Richard Young.  “The clinics and drills will help further develop the skills of the local Chinese football teams and the American Football Celebration activities will be enjoyed by the growing number of fans in China.”