Friday Night Lights is a common term in the world of high school American Football. Long before spawning a book, a movie and a television series, it described the excitable gathering of sporting devotees across the nation on fall evenings, faithfully cheering on the pride of their community.

A year ago, thousands of miles from the home of that iconic scene, Dublin Friday Night Lights captured the imagination of intrigued local sports fans and served up a classic encounter befitting the American tradition.

This week, the teams will meet again on more familiar territory to open their 2015 season, Penn Manor playing host. So it seems fitting that as the new look website GlobalFootball.com celebrates the successes of some of the athletes and coaches who have at some point crossed paths with Global Football during the past twenty years, we should feature this great rivalry.

Twelve months ago in Dublin, Penn Manor emerged as 27-20 winners over Cedar Cliff. Quarterback Tanner Erisman guided the Comets to victory under head coach Todd Mealy. The game was a new experience for Colts head coach Colin Gillen, who took charge of his first game at Cedar Cliff and for sophomore quarterback Grant Breneman, who started under center for the first time.

Sports Illustrated recognized Erisman for his performance, selected as one of the magazine’s Faces In The Crowd.

“The kids will remember the game right now and when they’re older and I think it will coalesce with all the other experiences they have on this trip,” said Penn Manor coach Todd Mealy during postgame interviews. “I hope many of them continue to travel.” 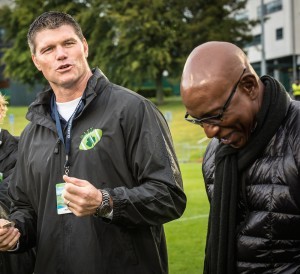 The Pennsylvania media, in Dublin to cover the following day’s Croke Park Classic college football clash between Penn State and UCF, descended on the UCD Bowl, giving the event blanket coverage back home alongside journalists representing Dublin’s outlets. Aertv broadcast the matchup live via a webcast to those families and friends who had not made the trip from Pennsylvania and the Dublin Friday Night Live spectacular went off without a hitch.

“Being a native of Pennsylvania myself, and having played in the legendary Big 33 Game in 1969, it was a thrill to welcome two top schools from the state,” explained Patrick Steenberge.

“Both schools were wonderful to work with throughout the process of planning, and then played a thrilling game. They also had a superb time visiting and learning about Ireland, topping off their six-day journey. I will be watching this week’s results from afar with strong interest.” 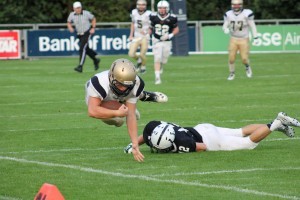 Now, in 2015, as the Colts and Comets prepare to meet again on Friday, the roles are reversed. Gillen and Breneman return to Cedar Cliff following an 8-3 season, but it is all changed at Penn Manor with a new head coach in John Brubaker and a new quarterback since Erisman completed his senior year. Penn Manor has won the past three meetings, including a playoff victory, with a total of only eight points separating the rivals in the past two games.