Neither would the former American football player and head coach have imagined that youngsters would travel from all over the world to compete on the gridiron. Then again, the innovative visionary might not have been all that surprised to learn that the game he loved would one day appeal on a global scale.

The modern day devotees of youth American football have made an annual pilgrimage to the Pop Warner Super Bowl for the past 58 years and since 2010, Global Football has organized an international tournament, known as the Friendship Bowl, at the event. Teams from Canada, Mexico, Panama and the United Arab Emirates have joined the 64 American teams and numerous dance and cheer groups at ESPN Wide World of Sports™ Complex. Global Football will bring international youngsters eligible to play in the Jr. Midget and Midget groups in December of this year.

“This all started about eight years ago when my longtime friend Jon Butler, Pop Warner Executive Director, and I met to talk about the global development of the sport,” explained Global Football President Patrick Steenberge, who first introduced an international tournament to the event in 2010.

“Pop Warner had in past years hosted individual foreign teams for one-off games, so knew there was some interest. With my experience running the Super Bowl Under-19 event, the NFL Global Junior Championship, I had a solid understanding of the youth development worldwide and contacts in many countries. So we started with teams from just Mexico and Canada, then added Panama, last year the UAE, and now Brazil is bringing a team. I am confident this International Super Bowl will continue to expand to include teams also from Europe and Asia.” 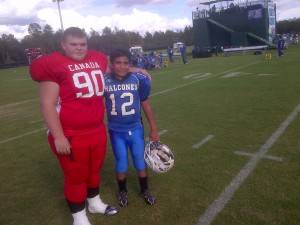 The 2014 international event marked the first time young athletes from the UAE had ventured to the Pop Warner Super Bowl, as a record nine teams entered the bracket. One of the mainstays of the five Global Football-organized international tournaments has been a group from Canada that competes annually.

“Every year that we attend our players have a fabulous time, from the friends we meet and the level of play we experience,” says Patricia Lamont from Ontario, Canada. “It is an honor and a privilege to be able to attend this Friendship Bowl with the international teams and we hope that we are able to do so in the years to come.”

Pop Warner, who earned his nickname because he was older than most of his Cornell University football teammates, died in 1954 at the age of 81. His fascinating legacy, which includes introducing many of the elements of today’s game of football, such as the screen pass and the use of shoulder pads, is explored in this excellent RadioLab podcast.