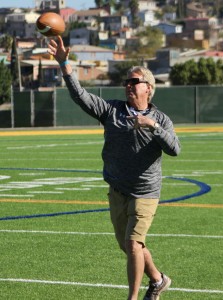 Patrick Steenberge and Global Football are honored and excited to again bring Team Stars & Stripes – an American squad of select Division III college seniors – to Mexico to participate at the eighth annual Tazón De Estrellas in Mexicali on December 17.

This will be the 19th time that a Global Football-organized team has ventured to Mexico to play in the Tazón De Estrellas and its forerunner, the Aztec Bowl, a game that was initiated by Patrick Steenberge in 1997.

“I vividly recall getting the phone call in 1996 from legendary Coach Ron Schipper asking me – rather demanding – that I help him create a very special postseason opportunity for worthy D3 senior players,” said Steenberge, who is attending press conferences for the 2016 event in Tijuana and Mexicali. “Since then we have been able to take more than 800 top NCAA Division III student athletes and dozens of coaches for a full week immersion into the Mexican culture, culminating in the highly competitive football game. It is my favorite week of the year!”