Games on September 10. Ford Center at The Star in Frisco, TX will host its second Catholic Bowl.
The celebration of Faith, Freedom, and Football will seize Texas high school football as an opportunity for cultural exchange and authentic Catholic identity between rising powers within the TAPPS ranks and an out-of-state college preparatory institution founded in 1911.

“We are again excited to welcome all of the teams for the Catholic Bowl II at Ford Center,” said Stephen Jones, Chief Operating Officer of the Dallas Cowboys. “I know how exciting and meaningful last year’s involvement was for my alma mater Little Rock Catholic. This event represents many of the reasons we built The Star and we look forward to showcasing another inaugural event.”

Houston St. Thomas and Fort Worth Nolan Catholic are back from the 2021 inaugural landmark event for a prime time encounter that kicks at 5:30 p.m. Plano John Paul II is a third returning program and faces St. Edmund of Eunice, Louisiana in a 1:30 p.m. showcase. The expanded slate for 2022 includes four-time TAPPS IV state champion Shiner St. Paul facing Muenster Sacred Heart at 9:00 p.m. in a rematch of the 2021 state title game won by the Cardinals 36-8.

Tickets will be available August 8 through seatgeek.com. The Drury Hotel Frisco will host visiting families and alumni.

The joint venture between the schools is the genius of Global Football, an acclaimed exporter and producer of American football and marquee matchups for U.S. colleges and high schools to play internationally. The games will be the climax a weekend of special activities held to mark the occasion.

“The Cowboys are a world class host and brand. And we are thrilled to again partner with the Catholic dioceses of Dallas and Fort Worth,” said Patrick Steenberge, founder and president of Global Football since 1996. “Our debut doubleheader delivered two exciting games, both decided in the final seconds. The tribute to the 20th anniversary of the 9/11 attacks was riveting, the response to faith, freedom, and football striking in our enthusiastic crowds. The standard has been established and our encore promises to be a powerful opportunity to renew and ignite meaningful relationships.”

The upcoming September weekend of fellowship will lead off Friday with a concelebrated Mass involving an estimated 500-plus attendees from the six institutions. Catholic Bowl II will also provide a stirring tribute to Army Chaplain and Capt. Emil Kapaun, a priest who returned to military service in Korea after his World War II commitment. The valiant hero died in a prisoner of war camp and was posthumously awarded the Congressional Medal of Honor in 2013. Pope John Paul II declared Chaplain Kapaun a Servant of God, the first stage to canonization.

A moving video commemoration of 9/11 will be shown in-stadium during each game as the following day will mark 26 years since that tragic moment in American history. We want to be sure today’s students remember and learn from history.

On game day, a pair of iconic figures from the legendary University of Notre Dame football program will be introduced as Catholic Bowl II Honorary Chairmen.

Mike McCoy was a consensus All-American defensive tackle for Hall of Fame coach Ara Parseghian and the second selection of the 1970 NFL Draft. After a significantly successful 11-year professional career, mostly with the Green Bay Packers, he became the driving, inspirational face that is Mike McCoy Ministries, sharing his positive life message with thousands of young people.

Reggie Brooks was a dynamic game-breaking All-American running back for the Fighting Irish and a 1992 Heisman Trophy finalist. For nearly two decades, he served as Notre Dame’s assistant athletic director of athletics alumni relations and now is the executive director at the Lou Holtz Heroes Foundation, Inc. Brooks and McCoy both lead a life of purpose instilled by a deeply rooted Catholic faith. They will each meet with and inspire all the Catholic Bowl players and coaches.

“It is an honor to be joined by six outstanding Catholic high schools who will showcase their faith, freedom and football at the Catholic Bowl II,” Steenberge said. “These student-athletes and coaches, along with their school support groups, parents, and fans epitomize the values we hold so dear, those of Catholic education along with competitive athletics. Never has it been more critical that we stand up proudly for what we believe, how we choose to live and how we are grateful for our God-given talents.”

About the Star
The Star is the 91-acre campus of the Dallas Cowboys World Headquarters and training facility
in Frisco, Texas. Developed as a first-of-its-kind partnership between the City of Frisco, Frisco
ISD and the Dallas Cowboys, The Star features Ford Center, a 12,000-seat stadium that hosts Frisco ISD football games, concerts and other events; Cowboys Fit, a 60,000 square-foot gym developed in partnership with leading fitness developer, Mark Mastrov; Cowboys Club, a members-only club where the country club meets the NFL; the Omni Frisco Hotel, a 16-floor, 300-room luxury hotel; Baylor Scott &amp; White Sports Therapy &amp; Research at The Star, a 300,000 square-foot center of excellence for sports medicine; Twelve Cowboys Way, a 17-story, luxury residential tower in partnership between Pro Football Hall-of-Fame Quarterback #12 Roger Staubach, and Dallas-based developer and former Dallas Cowboys center, Robert Shaw; Formation, a dynamic coworking experience offering a collaborative work environment of open workspace, dedicated desks and private offices; as well as a variety of shopping, dining and nightlife options throughout The Star District. For more information on The Star, visit TheStarInFrisco.com. 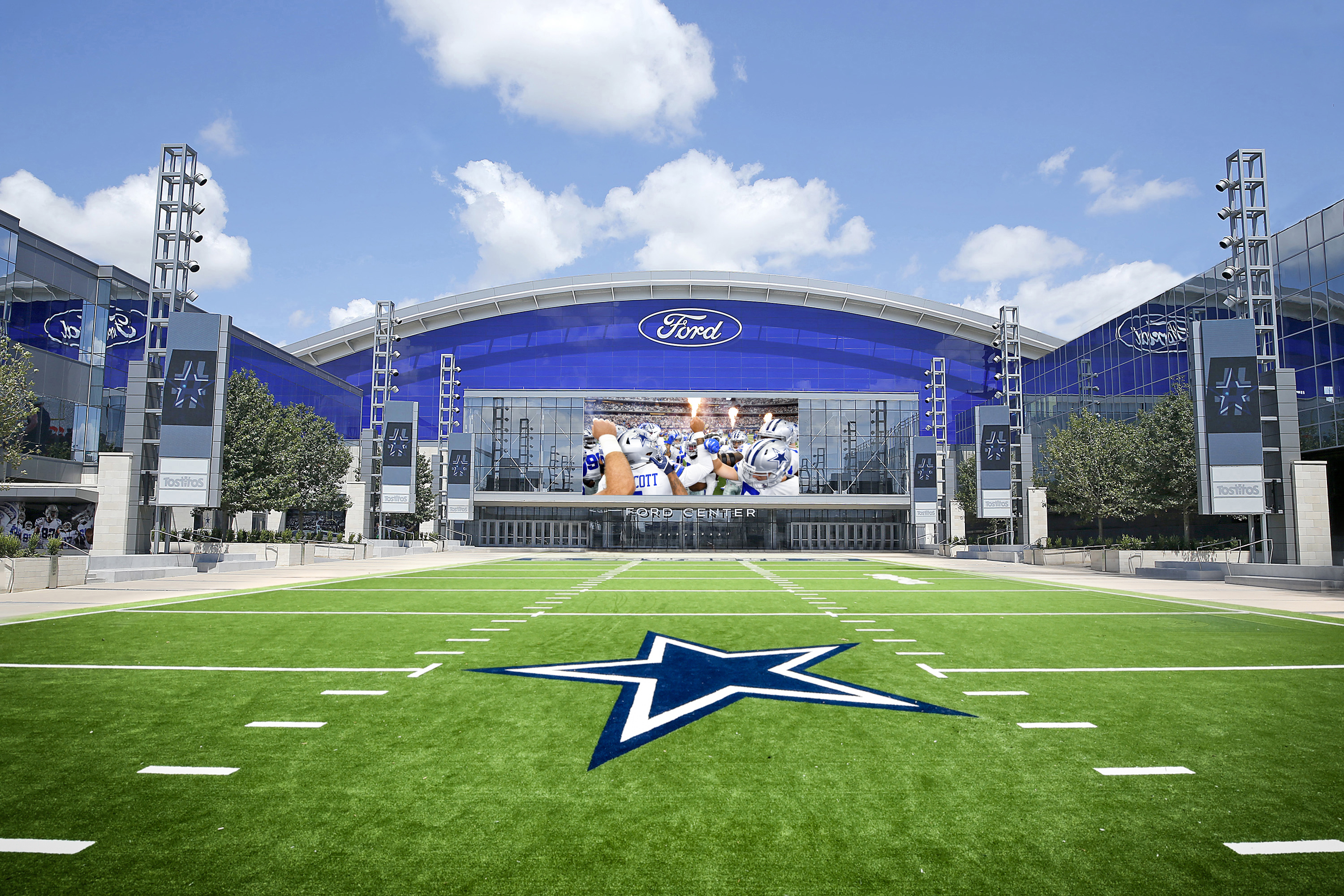 About Global Football
Global Football is an event production company specializing in organizing amateur football events across the globe. It is led by Global Football founder and president Patrick Steenberge, himself blessed by 16 years of Catholic education, capped by four years at the University of Notre Dame where he played under Hall of Fame coach Ara Parseghian. Under Steenberge’s leadership, Global Football Inc created and managed the NFL Global Junior Championship at Super Bowls from 1997 to 2007, the Aztec Bowl and Tazon de Estrellas in Mexico from 1997 to 2017. Global Football staged the first-ever game of American football to be played between two college teams on the African continent when Tanzania hosted the Global Kilimanjaro Bowl in 2011. The Global Ireland Football Tournament 2012 attracted more than 12,000 spectators to three venues in and around Dublin as 12 high school and college teams from the United States and Canada traveled with Global Football to the Emerald Isle. This will be repeated in 2023 alongside Notre Dame-Navy. Each summer Steenberge leads Kileleni Leadership Experiences in the Colorado wilderness which include a 14,000’ summit hike and whitewater rafting all focused on Leadership and Teamwork. In addition to hundreds of events Global Football has managed and created, its foundation was built to serve the community and the future of the sport. The Global Football Foundation, a 501(c)(3) non-profit, was formed to further the
commitment to these goals.