Bjoern Werner, who came to the United States as a member of the Global Football operated International Student Program, was selected 24th in the 2013 NFL Draft by the Indianapolis Colts. 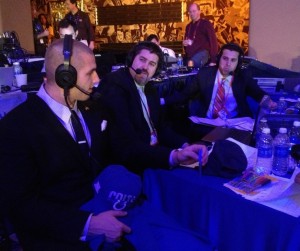 “Without the International Student Program I wouldn’t be here,” said Werner.  “I’m really sad they closed it, but a big goal after my career is to open something like that and get it going.

“Without Coach Adamson and Patrick Steenberge and Mike Preston, I wouldn’t be here. There’s so many people who gave me opportunities and I thank them all.”

Here are Bjoern Werner’s thoughts immediately after his name was called at the Radio City Music Hall in New York.

(On being an inspiration to young American football players in Germany)

“Now we have three guys from Germany in the National Football League and we’re definitely going to motivate a lot of kids in Germany and in Europe to also make the jump from playing there to the NFL. And hopefully they do because there’s a lot of potential out there.

“This Draft will hopefully be a big step towards ”

“I knew I had a few teams and my agent had said the Colts were interested and my defensive line coach from Florida State was here and he said he had a really long conversation with the defensive coordinator and they were really positive. They said if I fell to the Colts they were going to take me and I’m so excited they did.”

“It’s a great organization and they made it to the playoffs last year and the future looks so bright that I just can’t wait to meet everybody and just try to get accepted in the team and make the jump and just try to prove myself.

“Last year they were such a great team and they made it to the playoffs and they just surprised everybody and they were the Cinderella story. It’s such an honor to go in there and try and help the team win. I can’t wait to prove that I’m worth that pick.”

“It was a really special three days. For them it was the first time over here. They’ve never seen me play in America and now being here seeing me make that jump; it was really big, for all of us, as a family.”

(On his parents attending his first Colts game, perhaps the first one)

“I don’t know if they will, but they’re definitely going to come to one game this year, but I don’t know which one it is.”

(On the suggestion he is ‘the next Dwight Freeney’)

“I used to play as him on the Playstation when I was 12 years old. It’s so ridiculous that I can’t even talk about it right now.”

(On his immediate plans)
“Tomorrow morning I’m going to fly to the Colts for the press conference and from there on I don’t even know. Maybe next week there’s the rookie mini camp, or in two weeks, I don’t know. My family are flying straight home tomorrow.”

(On fellow German Sebastian Vollmer of the Patriots)

“I’ve never met him in person, but we have the same agency and they got us in contact. He actually called me when I declared for the Draft and gave me some advice. He’s been in the league for four years already, he knows what he’s doing and he just tried to give me some tips. I’m all about tips and knowing what to do.

It was the same for Markus Kuhn from the New York Giants. He was actually the player host when I was in high school and I visited at North Carolina State. So with three Germans, we know each other and… this is crazy!”

“We didn’t care who was going to be picked first and who was going to be picked last, we were all just happy for each other. It was a great feeling that we did it together in the same year and that was the same for all the draftees. I worked out with half of them and I met almost everybody at the combine and everybody just works together and wants to get it done. But the next time we see each other it’s going to be on different teams and then we’ll play some football.”