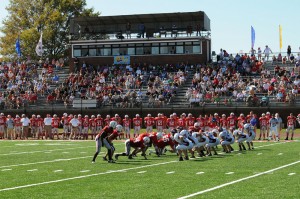 The Hanover College football team has touched down in Ireland where players and coaches will explore the Emerald Isle with Global Football before heading to Scotland to face top British American football club team the East Kilbride Pirates.

The traveling student-athletes have already spent two weeks in the classroom in Indiana, learning about the political and historical culture of Ireland and Scotland that they will experience as part of a syllabus offering credit towards final grades as part of the visit to Europe. The group will balance sightseeing, learning and football during a seven-day adventure across the Atlantic.

“Everyone that has traveled with us during the past twenty years of overseas visits has learned more in a week of hands on exposure to foreign cultures than they could in months of reading text books,” said Global Football President Patrick Steenberge. “By creating a formal course to understand the significance of the wonderful historical places this group will visit, Hanover College is further enhancing this experience of a lifetime for their students.”

The Hanover course will examine the complex relationship between geography and culture in the modern history of Ireland & Scotland, with some emphasis on the role of sport in these places. It will combine lecture, discussion, and travel experience, including a cross-cultural football game in Scotland.

The goals and objectives aim to acquire a general narrative overview of the major periods and events of Irish and Scottish history; compare and contrast the cultural development of Ireland and Scotland; ponder the role of geography in the creation of culture, with a slight emphasis on sporting culture; and formulate specific questions about the history and future of sport, particularly American football. The student-athletes will pursue answers to those questions by keeping a journal during the tour and will compose a reflection essay upon their return.

The first two weeks of this course have already been completed on campus, consisting of assignments, participation in lectures and discussions and exams, leading to a weekly grade. A third component of the final grade will focus on the students’ performance as a member of the travel group, before a final evaluation of the Reflection Essay.

The Panthers will take on Scotland’s top American football team the East Kilbride Pirates on Saturday, May 16, at Hamilton Rugby Club on the outskirts of Glasgow, kickoff 1pm local time (8am US ET).

“I am very excited to be bringing the Hanover Panthers to Scotland for our game against the Pirates,” said Hanover coach Steve Baudendistel. “The opportunity to visit Ireland and Scotland will be a great cultural and educational experience for our players. We have had two great weeks of practice and are looking forward to the game on Saturday.”

Last season the Pirates posted an unbeaten 10-0 record during the regular season and reached the semi finals of the playoffs under head coach Ross Templeton. Having suffered a narrow 31-28 loss to open the 2015 British American Football season, the Pirates rebounded with a 63-2 victory over the Yorkshire Rams. This past weekend they beat the Coventry Jets 37-6 at home.

“We’ve been preparing for this game the same way we do for any regular season game, so if we get game film in advance we break it down to find the tendencies, and then we run ‘Scout’ sessions in the practices prior to the actual game,” explained coach Templeton.

“The excitement of playing against a US college team has been building for some time, but as coaches we have been trying to keep our players focused on each game as they come. We’re expecting this game to be big, and Hanover to be as good, if not better, than any game we have played in the UK to date.
Our season hasn’t started the way we wanted it to with a loss in our first game, and since then we have made a huge change to our defense, and went back to basics across the board to get back on track. This appeared to work and we performed much better in our second and third games, but we still have some hard work to get to the levels of performance that we aim for.

“As much as having this game in the middle of our season isn’t ideal in some ways, it is also perfect to have it right now to see how we perform and really help us to improve and take another huge step forward as a team. This is a great opportunity for our guys to grow and build on our experience. We are really looking forward to this game.”