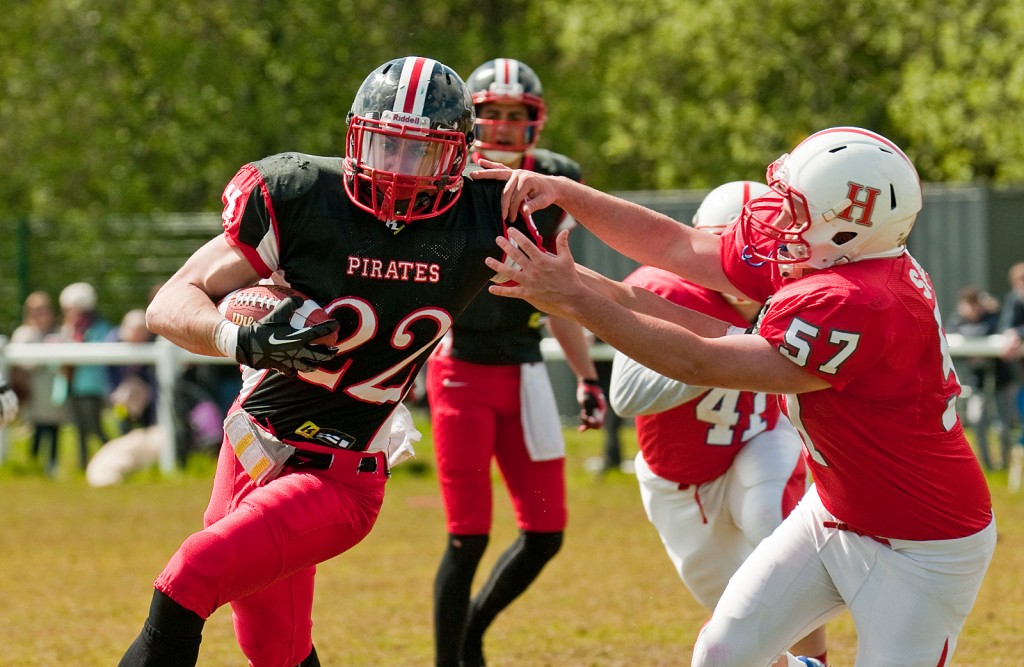 Hanover Panthers enjoyed a fourth quarter scoring flurry to earn a 51-0 win over a determined East Kilbride Pirates team in the first Global Football tours game of the spring.

Freshman running back Justin Conners scored a hat-trick of touchdowns in the victory.

The Scottish hosts put up a brave fight against their American college opponents from Indiana, moving the ball regularly on offense, but were unable to breach the visiting defense. The Pirates saw a field goal attempt bounce agonizingly off the crossbar and held the Panthers to only 18 points in the first half.

“It was a great learning experience for the guys, playing against opposition of that quality,” said Pirates receivers coach Jason Byworth. The former London Monarchs and Scottish Claymores wideout played for Team Europe at the first-ever Global Football-organized NFL Global Junior Championship in 1997.

Byworth added: “We managed to move the ball well and had a couple of good drives, so we were disappointed not to put points on the board.”

Global Football President Patrick Steenberge said: “Everyone involved has enjoyed a wonderful afternoon of American football. The whole event was well organized by an impressive group of people and we have tremendous respect and admiration for the East Kilbride Pirates and the hard work they put in to make this visit a success.”

The bond between the Pirates and Panthers will become even stronger on Sunday when Hanover coaches and players help coach the East Kilbride Under-16 youth team, passing on their knowledge and expertise. The group will include Panthers assistant coach Jim Hautman, a former offensive lineman on the 1997 Notre Dame NCAA national championship team.

A five-yard touchdown pass from Chase Lightfoot to Nate Hein put the Americans on the board before the extra point was blocked then a Conners one-yard scoring run opened a 12-point first quarter lead. Conners breached the end zone again from five yards out in the second quarter.

Freshman quarterback Mitch Walrod completed a string of passes on an impressive drive that culminated in a Conners two-yard run to the end zone for a 24-0 lead after another extra point was blocked. 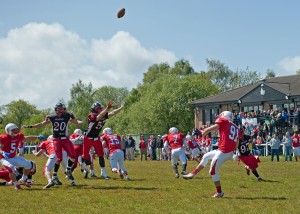 The Pirates came up short on an attempted fake punt and the Panthers hit back with a 10-yard Lightfoot run for a 31-0 lead as Adam Goepfrich split the uprights with the extra point.

Panthers coach Steve Baudendistel ensured his entire traveling roster saw action in a good competitive game and an eight-yard run by Tanner Parker opened up a 37-point advantage at the two-minute warning. Two further Hanover scores late in the game proved harsh on the determined Pirates.

Vince Peiffer raced in from five yards out and linebacker Kevin Scholz capped the scoring with a 25-yard interception return for a touchdown. Goepfrich successfully tagged on both extra points.