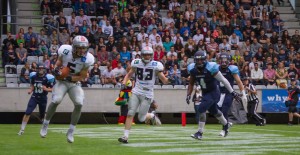 The Elmhurst College Bluejays faced one of Europe’s top club teams the Swarco Raiders Tirol in Innsbruck as the highlight of a nine-day visit to Austria and Switzerland with Global Football from May 31 to June 8.

Taking advantage of NCAA rules that allow D-III colleges to travel every three years, the Bluejays traveled to Greece and Italy with Global Football in 2013, Germany and the Czech Republic in 2010 and Italy in 2007. 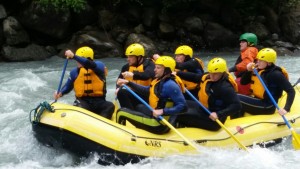 Having arrived in Switzerland on June 1, the Elmhurst travelers took a cable car up Mount Pilatus, rode a Panoramic Gondola from Kriens to Fräkmüntegg and took the Aerial Cableway to the Pilatus Kulm summit.  During a strenuous start to the visit, the group hiked to Wengen and took part in a team building white water rafting or canyon activity.

After a Lake Brienz cruise, the group visited Liechtenstein then moved on to Innsbruck via the Bergisel Ski Jump. Stops at historic Salzburg, the game host city of Vienna, a tour of the Schönbrunn Palace and a visit to the Prater Amusement Park to complete the experience of a lifetime.