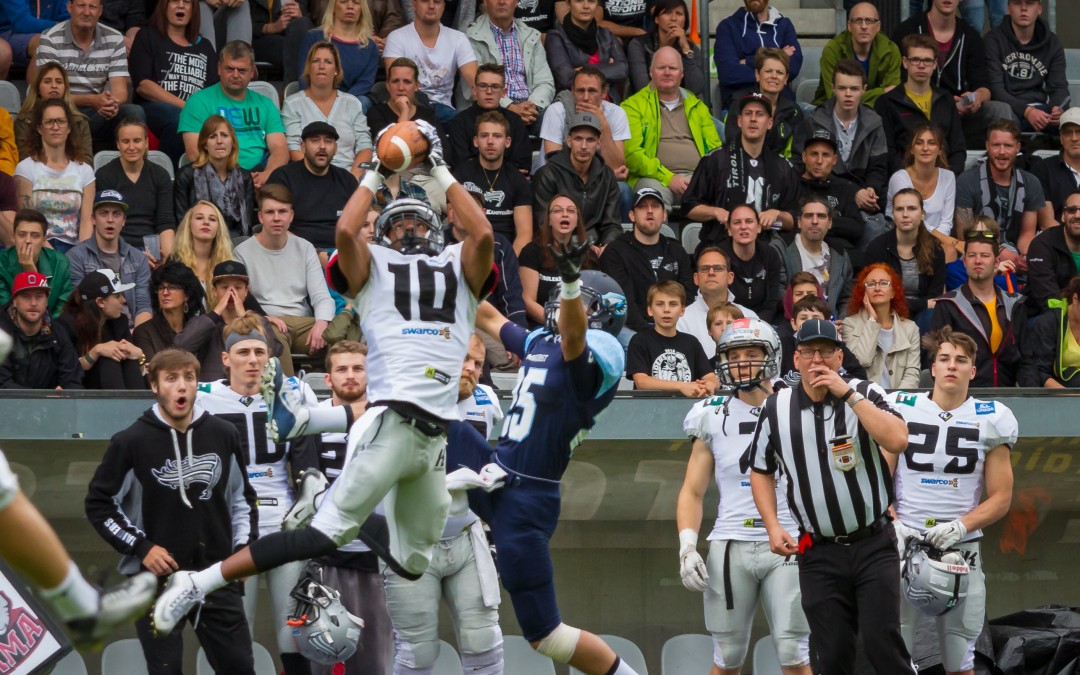 More than 5,000 fans packed into the Tivoli Stadium in Innsbruck to see reigning Austrian champion the Swarco Raiders Tirol defeat the Elmhurst Bluejays 24-10 on Saturday.

“It was a great game, a unique atmosphere and a journey that none of us will ever forget,” said Bluejays head coach Ron Planz, whose side is midway through a tour of Switzerland and Austria with Global Football. “We knew that a serious opponent would await us here and the Raiders were just that.”

Raiders wide receiver / kicker Clemens Erlsbacher, who scored 12 of his team’s points with 4 receptions for 79 yards and a touchdown and a field goal and 3 extra points, and Elmhurst running back Danny Bourgault were named game MVPs.

After the Bluejays had been forced to punt away the opening possession by a tough home defense, the hosts methodically worked their way downfield. Wide receiver Adrian Platzgummer reeled in a 7-yard touchdown-pass from quarterback Sean Shelton, who would end the day with 17 of 24 passes completed for 201 yards, 2 touchdowns and an interception. Erlsbacher tagged on the extra point, so the Raiders led 7-0 with 5:03 to play in the first quarter.

Bluejays quarterback Orlando Hernandez was intercepted by Dijon Washington in reply and after gains by Sandro Platzgummer and Christian Willi, a 49-yard Erlsbacher field goal 33 seconds before the end of the first quarter earned the Raiders a 10-0 lead.

After a 53-yard Brett Bayer field goal attempt came up short, the Bluejays got on the board with a second quarter safety when running back Milton Knox was held in his own end zone. Elmhurst produced two interceptions, but was unable to turn either into points and trailed 10-2 at halftime.

The Raiders put together an impressive drive, starting at their own 7-yard line, to score and increase the advantage to 15 points. Knox started with an 11-yard run, Shelton ran 8 yards, and a short pass to Willi brought a first down at the 32-yard line. A pass to Knox and two rushes by the Tyrolean back brought took the ball to the Elmhurst 46-yard line and from there, Shelton found a small gap, escaped a tackle and sprinted 45 yards to the end zone. The reliable Erlsbacher gave the Raiders a 17-2 lead with 3:39 remaining in the third quarter.

Working from their own 9-yard line, the Bluejays fought their way back into the contest. Three runs by Bourgault ate up 40 yards, then when faced with a crucial fourth down, Elmhurst went for broke. Garrett Claxon caught a 47-yard touchdown-pass from Hernandez, who then threw a two-point conversion pass to Connor Brewer, reducing the deficit to a touchdown with 7:02 to play.

Knox returned the resulting kickoff up to the Tyrolean 33-yard line, then with the ball in his hands again left several opponents in his wake and raced to the Elmhurst 29-yard line. After a quick 14-yard connection from Shelton to Kyle Callahan connection, Erlsbacher came up with the ball in heavy coverage for a 15-yard touchdown reception and split the uprights to earn a 24-10 unassailable lead.

“That was a great experience for everyone on our team,” said Raiders head coach Shuan Fatah. “We wanted to show that football in Europe has progressed and we wanted to offer our loyal fans something special. I think both teams succeeded today in entertaining the crowd.”

The Bluejays will continue their Global Football tour of Switzerland and Austria by visiting Salzburg and Vienna before returning home to the United States on Wednesday.