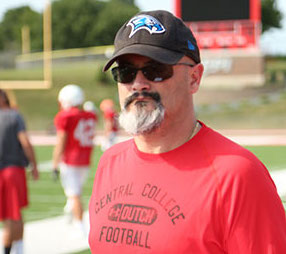 Global Football matched the Italian Football League (IFL) coaches with NCAA Division III college partners who have traveled overseas with the Texas-based company in recent years, giving the visitors an opportunity to enhance their coaching skills on the gridiron. They will in turn transfer that knowledge to help develop players in Italy.

“I am thrilled to hear from our clients across the NCAA Division III programs to learn how happy they have been with their visiting coaches,” said Global Football President Patrick Steenberge. “This idea came about during a post-game conversation in Rome among with Jeff McMartin of Central College, the Roma Grizzlies head coach and myself. When I took the concept to Fabrizio Cuppelini of FIDAF (Federazione Italiana Di American Football), we figured out how to make it work.

“The key element was the welcoming nature of the college programs here in America, and a huge thanks goes out to those visionary men. We are all eager to see this grow, impacting the sport worldwide in a positive manner.”

Central College head coach Jeff McMartin said of the recent visit of Lazio Marines running backs coach Sergio Scoppetta’s visit to Pella, Iowa: “Sergio did a great job and was a good fit for our program. He is a smart and observant coach. He spent countless hours learning all about our system and style of play while he was with us. He is also a good person. Everyone associated with our college and football program enjoyed spending time with Sergio. I hope we will have the opportunity to work with him again.

“It was such a positive experience that we have extended an invitation to other members of the Lazio coaching staff to visit Central College and work with our coaches. The week with Sergio was a huge success. Go Marines!”

Coach Scoppetta said: “There are many big differences between American football in Italy and football here in the United States. Here they have professional-level teams, but we only have club teams in Italy. The rosters aren’t near as big, only about 25 people per team in Italy. We do not have as many meetings and coaches as American football here.”

Global Football will continue to provide coaches from Europe and later from other countries around the world with the opportunity to participate in the ICE initiative. Later this month, coaches from the East Kilbride Pirates in Scotland will benefit from visiting Hanover College in Indiana, after hosting Hanover for a game and clinic this past May.

In 2016, Global Football has a potential 12 spring tours and games to nations including: Austria, Czech Republic, Germany, Great Britain, Greece, Ireland, Italy, Mexico, Scotland, Spain, Switzerland and Panama, allowing host clubs’ coaches to have an opportunity to participate in the ICE initiative in August 2016.