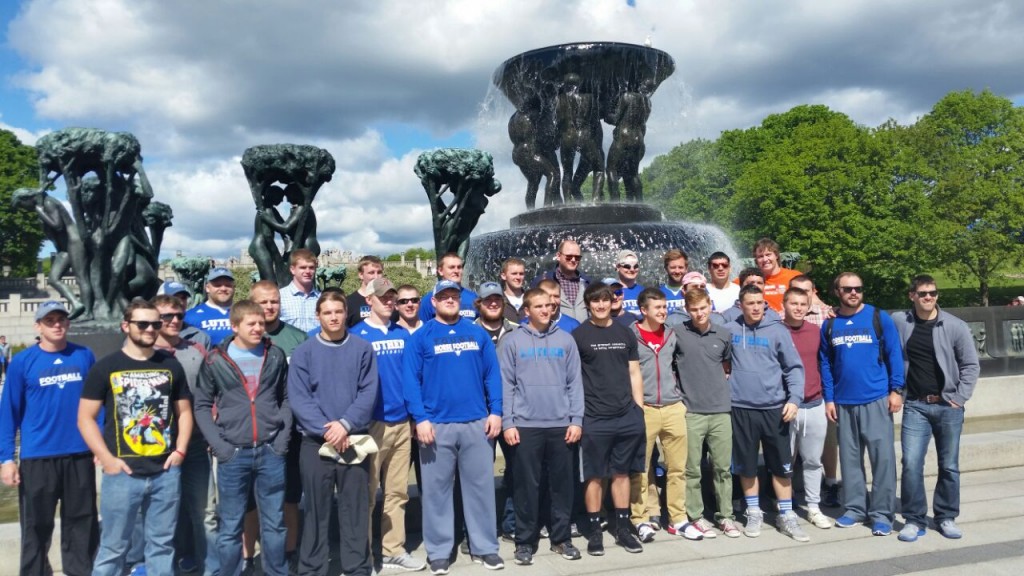 The American football team of Luther College arrived in Copenhagen, Denmark, on Wednesday morning, ready to embark on an educational visit to Scandinavia, highlighted by a game against the Norwegian national team on Saturday.

The student-athletes have already begun a culture and history course, focusing on the different places they will visit, to provide essential background information for the trip organized by Global Football.

While in Denmark, the Norse will hold a coaching session to help the development of Danish junior American football players, then on Saturday, May 30, in Oslo, head coach Aaron Hafner will lead his team against the Norwegian national team that will play competitively for the first time since 2007 following a period of rebuilding. The game against Luther, which kicks off at 3pm local time / 9am US ET, will help Norway build experience toward the European Championship qualification cycle that starts later this year.

“We’re really excited about this trip,” said Coach Hafner. “When I first got the job at Luther I sat down with some of the players to ask how we could improve our program and the experience they wanted playing football at Luther. I kept hearing the same thing over and over that they wanted to play abroad, so we set up a trip.

“It is going to be a study abroad program and we have a lot of educational pieces, but ultimately we get to play a game against the Norwegian national team, so we’re really excited about it.”

Coach Hafner was a member of the Team Stars & Stripes coaching staff for the annual Global Football-organized Tazón de Estrellas (Bowl of the Stars) NCAA D-III game in Mexico in December. Coaching the American select team at the end of season also allowed him to plan the Luther visit to Scandinavia.

“When I went down to Mexico, I had an opportunity to organize this trip with Patrick Steenberge of Global Football,” explained Hafner. “We wanted to do a community service project and some educational pieces and play some football and relax and have some fun. We came up with the best plan that we thought would be a great experience for our kids.

“I’ve told every kid that we recruit and those that are here now that this will be an every four-year thing and if you come to Luther you’ll have a chance to play abroad against a foreign team.”

Heading overseas on a spring tour allows coaches to get their players in pads, on the practice field and in a unique game situation during May, which also appealed to Hafner and his staff during their preparations for the 2015 fall campaign.

“You get a lot out of it and that’s part of the reason you travel,” he added. “The players who are going on our trip have an opportunity to get some extra practices in May, so yes, there’s an advantage there. Ultimately you get to go and play another game that much closer to the beginning of the new football season.”