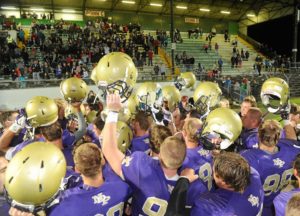 Notre Dame Preparatory High School has great memories of Ireland and next summer will return to the Emerald Isle to play a regular season football game as part of the 2020 Dublin High School Football Showcase.

The Saints’ football team and cheerleaders will head to Ireland from August 25-31, 2020, to immerse themselves in Irish culture through a series of educational tours and will showcase their brand of football, just as they did in 2012. Those interested in traveling to Ireland with Notre Dame Prep should visit: www.DublinFootballShowcase.com while further event details are available at www.GlobalFootball.com.

On their previous visit, the Saints defeated Father Judge of Philadelphia 20-6 in County Meath, located an hour north of Dublin, while honoring former head coach Scot Bemis, who had passed away the prior January. Saints running back and linebacker Luke Taffuri ran for two touchdowns and made five tackles in the win. This time around Notre Dame Prep will practice at the impressive athletic facilities of University College Dublin and will play in the nation’s capital at a venue that is to be announced, as is the opponent for varsity head coach George Prelock’s team.

“We are extremely excited to have this opportunity to represent our school and sport overseas,” Prelock said. “This is truly an amazing experience for the entire NDP community. We feel honored to be invited to participate in this event again and to provide our student-athletes with an extraordinary educational experience that will create lifelong memories.” 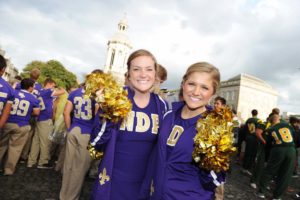 Notre Dame Prep principal Jill Platt echoed Prelock’s sentiment, saying: “This opportunity illuminates our philosophy of developing the mind, body, and soul of each student at NDP. Involving them in the occasion to represent NDP in such an athletic event that takes them across the world to experience different cultures, share their faith and demonstrate their school pride is irreplaceable. We are truly honored and excited to be invited.”

Notre Dame Prep will again help bring Dublin to a standstill when all teams, marching bands and cheerleaders join a city center parade on the Thursday night before the games, which will culminate in an American-style pep rally in the heart of Dublin City.

“We are delighted that Notre Dame Prep has chosen to return to Ireland seven years after that initial visit broadened the horizons of their student-athletes and all who traveled with the team,” said Global Football president and founder Patrick Steenberge.

The full list of high schools committing to the event will be announced during the coming months, with Fenwick High School from Chicago having confirmed their participation. All traveling players, coaches and supporters will attend the Aer Lingus College Football Classic between Navy and The University of Notre Dame at the Aviva Stadium on Saturday, August 29, which is a partner event. 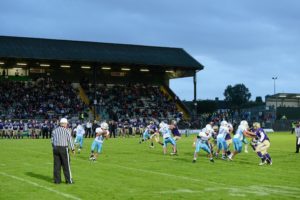 “Notre Dame Prep will be part of game-week 2020, which will attract more than 35,000 U.S. visitors to Ireland along with worldwide sports media, including ESPN which will broadcast the ND-Navy game live. I know the entire NDP community is looking forward to joining the team in Ireland,” Steenberge added.

Four-time Super Bowl winner and decorated U.S. Military veteran Rocky Bleier will serve as Honorary Chairman for the high school event. The former University of Notre Dame running back will attend the series of games to perform a ceremonial coin toss and will welcome all participants at the August 27, 2020 Pep Rally.

Opened in 2002, Notre Dame Prep is a Catholic diocesan college preparatory high school with a co-ed enrollment of 839 students. The school has received national recognition for the caliber of its academic, arts and athletic programs.