Global Football Founder & President Patrick Steenberge played football at the University of Notre Dame under head coach Ara Parseghian, who coached Notre Dame for 11 seasons and won two national championships.  Ara passed away on Wednesday at his home in Granger after an illness.

Patrick was among many former and current Irish players and coaches, who attended a memorial Mass at the Basilica of the Sacred Heart before a celebration of his life at Purcell Pavilion. 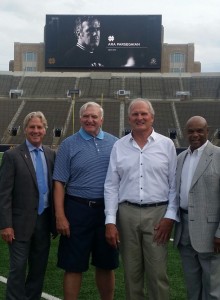 More than 100 former players gathered to tell Ara stories and recall moments as teammates, including Mike McCoy, Walt Patulski and Clarence Ellis, who are pictured with Patrick here in Notre Dame Stadium 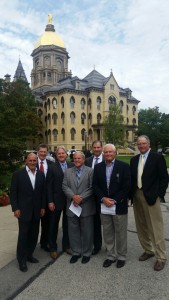 Irish,” said Patrick.  “He created a culture of Champions, of Team, Excellence; no excuses, doing it the right way was expected.  At various times over the four years I played for him I respected him, feared him, tried to impress him, learned from him, hated him, appreciated him.  Now I applaud him and his life, and thank him for making me a better man.”

Patrick also reunited with some of his Class of 1973 teammates: Mike Creaney, Ken Schlezes, Jim O’Malley, Denny Gotowski, Herb Brick and Darryl Dewan outside the Sacred Heart Basilica.
Ara Parseghian last coached the Irish in 1974 but remained a fixture around the program and in the community.