Seven Schools Travel To Europe In 2019 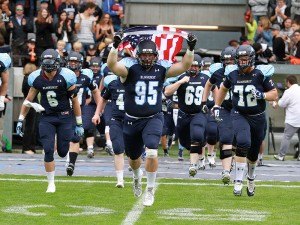 Student-athletes from seven colleges and universities will visit a total of seven European nations in 2019, as Global Football continues to broaden the horizons of the game’s players, coaches and fans through world travel, educational discovery and service. There are still a few other notable college teams considering global travel in 2019.

Entering its 24th year as the world’s leading exporter of American football outside of the United States, Global Football will celebrate the 150-year anniversary of American college football by continuing to create milestones for the sport.

Taking advantage of an opportunity to learn about unique countries and fascinating cultures, while also playing a competitive game on the gridiron against local opposition, eight college football teams will venture to Austria, Germany, Greece, Italy, Spain, Switzerland and the Czech Republic.

“Heading into our 24th year I am intrigued to welcome some first-time travel teams from Sewanee, Lewis & Clark and Muhlenberg,” said Global Football Founder & President Patrick Steenberge. “Not surprisingly though, Coach Rundle from Sewanee has experienced Global Football tours at his previous school, so is aware of the appeal.

“It is most rewarding to have coaches and school return as is the case with Ohio Northern, Luther, Elmhurst and North Central. Those coaches have firsthand knowledge of the value of these experiences and want to provide that opportunity for all their student athletes.”

Sewanee University (Tennessee) heads to Athens and Rome, Lewis & Clark (Oregon) travels to Spain and frequent traveler Ohio Northern is bound for the Swiss Alps, Innsbruck and Munich, all from May 13-21.

May 20-29 sees Muhlenberg College (Pennsylvania) visit Italy, then a week later from May 27 to June 4, Luther College (Iowa) heads to Madrid and Barcelona.

The educational tours, which are also available to family, friends and alumni, continue with two regular Global Football clients from Illinois taking advantage of NCAA rules that allow DIII teams to travel every three years. Elmhurst College will depart for Austria and Italy from June 5 to 13, while North Central make Berlin and Prague their chosen destination from June 10 to 18.

Since 1996, Global Football has produced games and events in 28 countries on six continents and in 2019, will join in the #CFB150 celebration of the first-ever college football game, that was played between Rutgers University and Princeton University on November 6, 1869.

Game day opponents for all traveling colleges will be announced at a later date.

Family, friends and alumni wishing to travel with Global Football can find more details at the web page http://www.globalfootball.com/2019-Tours.