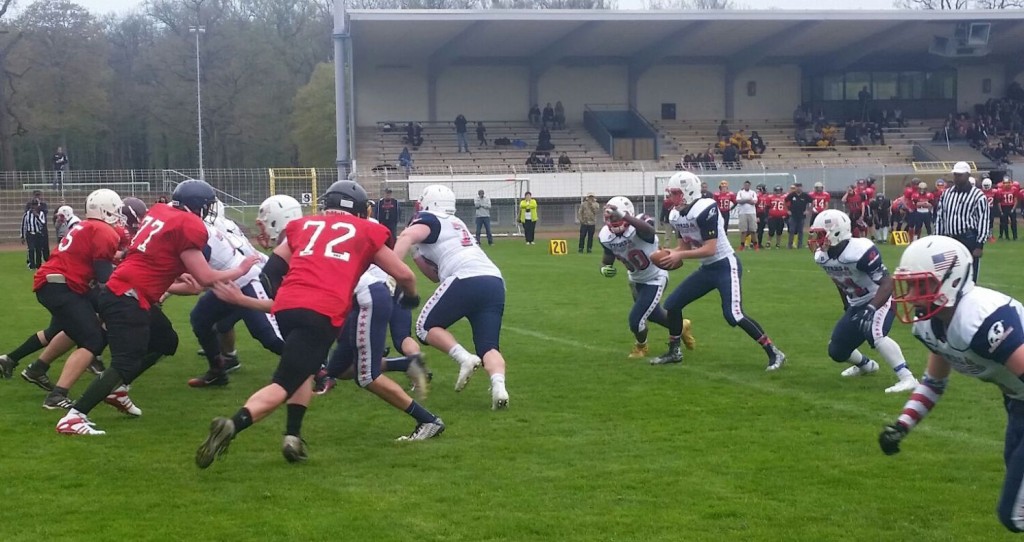 Hanau, Germany- April 9 – After seven days of touring some of the most interesting sites of Prague in the Czech Republic, as well as the medieval walled city of Rothenberg, Germany Team Stars & Stripes got dressed in their red, white & blue pants and jerseys, donned their US flag Riddell helmets and were ready to play ‘American football’.

The opponent was the Hanau High School All-Stars, a rare concept for the continent where teenage student athletes from a number of area German schools, bolstered by a strong contingent from Belgium and a few American boys for the DoDs schools, strapped on pads under the coordination of Rick Holland. A retired US Army visionary, Holland is making great strides in creating a high school league to help youngsters have an after-school and weekend athletic focus. He and a few of his buddies worked tirelessly to make this game possible, and their passion for football and for youth was evident throughout the day in the stadium area. 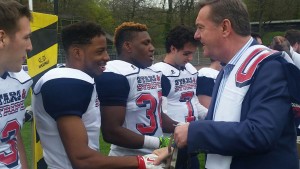 Along with this U19 team there were two squads of younger players who got to watch the big boys play and then take the field themselves; a Hanau Cheerleader squad, a parents-hosted picnic area, loudspeaker music and American officials. The stadium is of a traditional European style with the home side grandstand covered and standing room open air stands on the visitors’ side. It is home to the Hanau Hornets American football club, features football goal posts and a full 100-yard grass turf. Even the Hanau Lord Mayor Claus Kaminsky made and appearance during the second quarter of action, greeting all the US team members, giving them a souvenir and proudly receiving a Stars & Stripes game jersey from Global Football President Patrick Steenberge.

This was the ninth annual Global Ambassadors Bowl featuring high school seniors from across America, with the US having a 6-2 record against teams from Japan (twice), Italy (three times), Spain, Germany and Belgium on spring tours to those countries. This year’s roster boasted players from eight different states, led by coaches Bill Gallagher (Philadelphia), John Storey (Ohio) and Evan Sharpley (Indiana). The evening before the game, the coaches selected and recognized the team captains: Kevin McGranaghan (Father Judge HS, Philadelphia), Kyle Foerg (New Prairie HS, Indiana) and Dee Barlee (Episcopal Academy, Philadelphia). The coaches’ pre-game message was clear and concise, “play hard and fast, play smart and clean, remember you are representing your school, your family and your country.”

After receiving the opening kickoff the Americans were stuffed by the tall German defensive line, forcing a three and out punt and causing some initial concern on the sideline. The defense went right out and did their job, getting the ball back, but not until after a nicely executed tight end seam route pass for a lengthy gain gave the Hanau squad great field position. The second drive demonstrated some consistency following the adjustments made on the line, but following a couple of first downs on the ground a Kyle Foerg pass intended for Logan Poll (Lakewood HS, MI) was intercepted deep in German territory, giving them back the ball. The US defense was again up to the task, stuffing the running backs and quarterback in the backfield on consecutive plays and on third down Nate Griffin (Plainfield Central, IL) intercepted the lofted pass and returned it to the 30-yard line. From there Team Stars & Stripes quickly ran three straight power plays, ending the drive with a Dee Barlee three-yard touchdown scamper. Joe Gallagher (Father Judge, Pennsylvania) converted the PAT and the score stood at 7-0, until the end of the first quarter.

The second quarter turned out to be the most prolific of the day for the Americans, as they began to dominate both sides of the line of scrimmage, the play calling including some nifty counters and short passes. Quarterback Connor Lesko (Gilmour Academy, Ohio) scored on a seven-yard run following a flashy long run by Cole Berg (Grant Community HS, Illinois) to set up the score. Gallagher again was perfect with his kick, taking the score to 14-0. 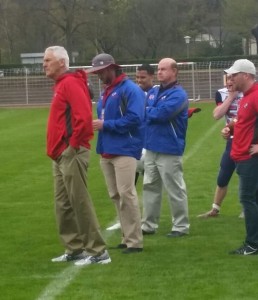 The ensuing kickoff by Gallagher was powerful, and the Hanau High School offense started deep in the shadows of their end zone, was swarmed over by the quick and determined US defense, resulting in a safety tackle made by Jason O’Meara (Lakewood HS, Michigan). Coach Gallagher employed an odd front defense with the three quick middle linebackers rotating at the nose tackle position, which caused fits for the big Germans all day long. Score 16-0.

While the Germans attempted to get their offense rolling by utilizing a number of different formations, the strong US front eight was solid and demonstrated their athletic talent, frustrating most every run attempt and most passes in the first half. Dee Barlee once again demonstrated speed and agility as he scampered 42 yards for the final score of the half, and when Gallagher split the uprights again, the score stood at 23-0.

The cool, cloudy afternoon was perfect for the teams to play under, but the fruit and energy bars provided by tour coordinator Tom Perry was most welcome during halftime.

The second half was similar in style to the first, with the Hanau boys able to make a few nice gains on the ground, but nothing consistent. This is always an issue with an ‘all-star’ team due to lack of practice time as a united squad. Meanwhile, Stars & Stripes was enjoying the day but also struggling at times to be consistent on offense. Wyatt Orr (Thompson Valley HS, Colorado) made a leaping interception mid-third quarter right in front of his own bench and fans, cheered on by his father Clint who traveled with his son throughout the tour. This set up another series of power runs and then a touchdown pass from Connor Lesko to Wyatt Orr with just a minute left in the third quarter, so the outcome was no longer in doubt. A bad snap caused the PAT attempt to fail, so heading into the final quarter it was 29-0.

While the Germans valiantly attempted a whole series of different running backs and linemen, getting everyone into the action, they could rarely crack the US defense. The prettiest play of the day was the leaping one-handed interception by Nate Griffin, his second of the day, that allowed for great field position again. This drive was culminated when Kyle Foerg fired a perfect touchdown pass to fellow quarterback Connor Lesko, his second score of the day. Gallagher’s kick finished off the scoring, a 36-0 outcome.

Immediately following the game there were the traditional handshakes, hugs, team photos and international goodwill demonstrated among the players and coaches and parents. Then the Stars & Stripes squad enjoyed traditional German bratwurst sandwiches, a well-deserved treat. After returning to the hotel our team feasted in a nearby restaurant and received accolades and awards as chosen by the staff. This tradition always allows the travelers to recount many of the tour’s highlights in a fun setting, to laugh at some of the things they experienced throughout the week, and to give thanks to folks who made this possible for each student athlete.

A special thank you Christmas ornament from Rothenberg presented to the ladies on this tour: Linda Storey, Jackie Sharpley, Cindy Rini, Connie Foerg.

Head Coach Bill Gallagher wrapped up the evening, holding his German flag proudly and noting what an amazing job everyone had done to join this tour, to learn so much from the experience, to win the football game, and to be thankful for the opportunity.

Later that evening the staff discussed various destination options for the 2017 Global Ambassadors Bowl, as we eagerly look ahead to the 10th annual event for high school senior ‘Ambassadors’.