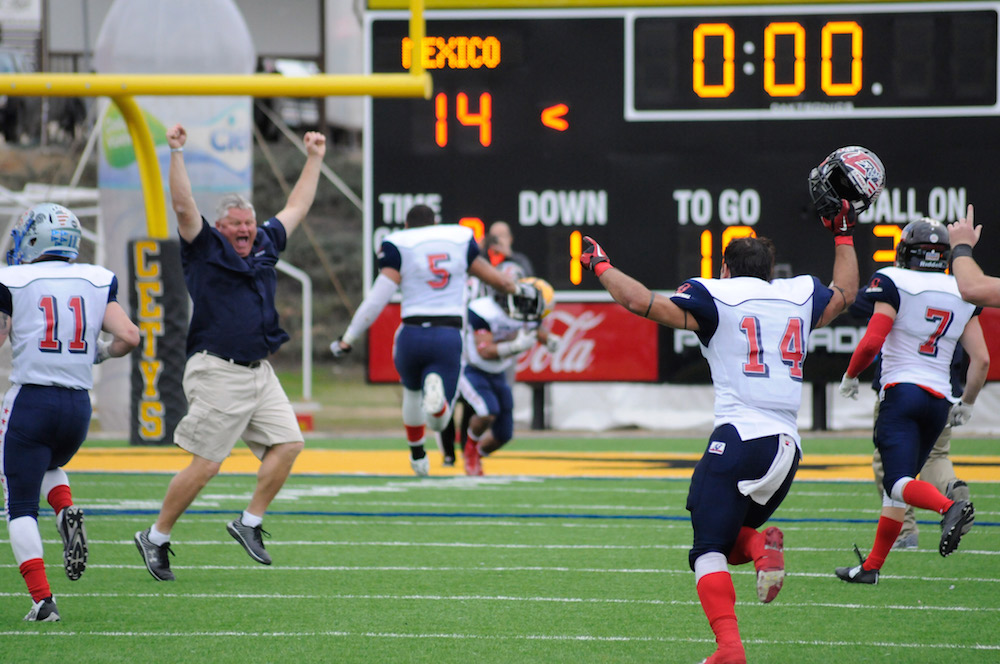 Less than 24 hours after arriving in Mexico, Team Stars & Stripes ran a two-point play on the first day of practice, Matt McDaniels tossing a pass to fellow quarterback Brady Huber in the end zone.

Trailing by 14 points, a fourth quarter comeback looked improbable for the Americans, though not impossible since forays into Mexican territory had proven threatening if not fruitful.

Team Stars & Stripes, still reeling from what appeared to be a costly turnover with the clock ticking down, rebounded when Huber (Illinois College) hit Josh Peach (Grove City College) – the receiver also reeling in the MVP award – and then George Vidas (Lake Forest College) for touchdowns on consecutive possessions to dramatically trail by only a point with 24 seconds to play.

The hosts expected another kick between the uprights to force overtime, but then head coach Don DeWaard (Central College) made a gutsy call to go for glory; the do or die two-point play that had worked on the CETYS University practice field on Monday.

It worked under the stress of a game on the line too. 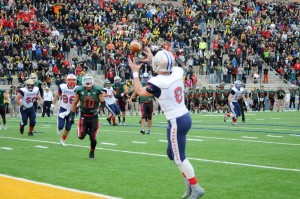 McDaniels (US Merchant Marine Academy), whose only previous pass had fallen incomplete, swept right and threw the ball back across to a wide-open Huber in the end zone for the winning points.

“I made that decision with about nine minutes to go, to go for the win rather than the tie if we were in a position to do so,” said DeWaard. “When it works you’re smart, but when it doesn’t, it’s your fault.

“I told the offense we were going for two and of course the kids were very excited because they always want to do stuff like that.

“I had watched them run that play a couple of times during the week. Our offensive coordinator Joe Austin said they had three two-point plays to choose from, so I didn’t know which one they were going to use. I just wanted us to go for two.”

The American defense still had to hold and limit CONADEIP to a potential game-winning field goal from 51 yards out, but like an earlier attempt, the ball fell well short of the goalposts off the boot of Luis Meza. Cue victory celebrations on the visiting sideline.

It might not have seemed possible, but there on the scoreboard glowed the final score the NCAA Division III select squad had worked for all week: Team Stars & Stripes 15 CONADEIP All-Stars 14.

Huber ended the day with 21 of 30 pass attempts completed for 255 yards and 2 touchdowns, with his chief targets Sanders (8-86), Peach (7-114-1) and Vidas (4-24-1). LB Dylan Zerki (Kalamazoo College) led the defense with 9 tackles, followed by CB Pat Clark (Lake Forest) and DB Quincy Marting (Washington University), who each posted 8. Clark also had a sack, while DE Brandon Stiers (Augustana College) had two and 2.5 tackles for a loss.

After a scoreless first quarter, Noman Contla had earned the hosts a 7-0 halftime lead with a 14-yard scoring pass to Carlos Olvera on third and goal from the US 14. He doubled the lead in the third quarter by finding Pedro Magallanes having broken a tackle on a Stars & Stripes blitz and having earlier made a crucial first down on fourth and three.

It just didn’t seem to be the Americans’ day, but then the momentum shifted slightly when first a Meza field goal was blocked and then one fell short from 47 yards away.

Brady went to work from his own 35, finding Octavius Sanders Kalamazoo College) for a 17-yard gain and Pat Cutillo Susquehanna University) for 27 more on a critical third down. On the next play, a corner route led Peach into the end zone and Huber hit him from 16 yards out, giving Team Stars & Stripes hope.

When what would likely be the final drive of the game, inside the two minute warning, started at the US 13, a comeback seemed unlikely, but Huber had other ideas. Five consecutive receptions, shared between Vidas, Peach and Sanders allowed EJ Edinburgh (Cal Lutheran University) and Huber to run the ball to within three yards of paydirt.

Huber was flushed from the pocket on the crucial play, but retained his composure as he identified Vidas as his prime target in the end zone for a touchdown that capped a thrilling 9-play, 87-yard drive. 14-13 to the hosts, read the scoreboard.

Then, following a Team Stars & Stripes time out and the decision to go for it all came the rehearsed and perfectly executed two-point conversion, the McDaniels to Brady pass that capped a thrilling victory. 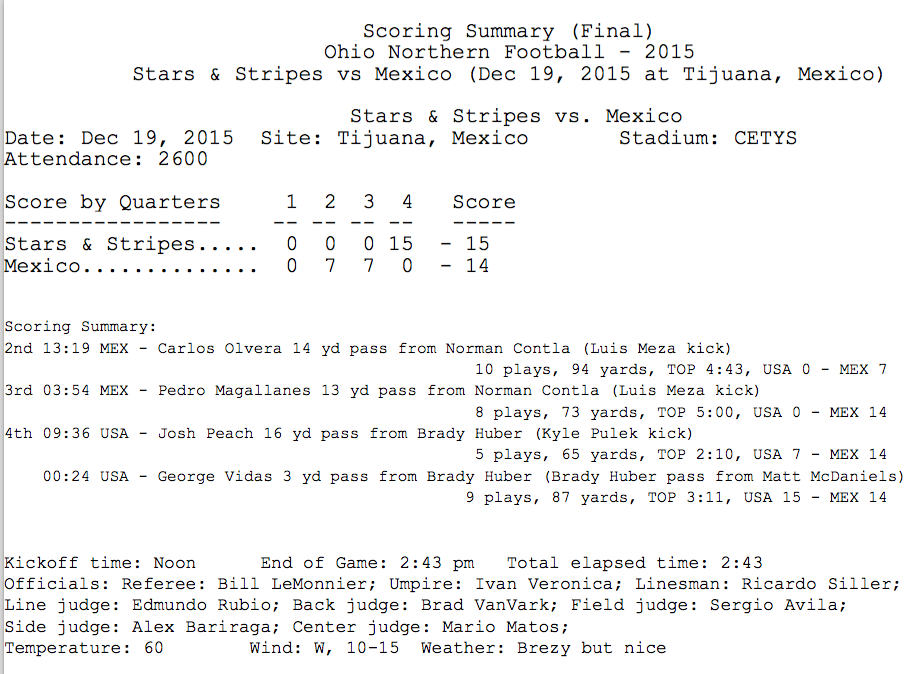 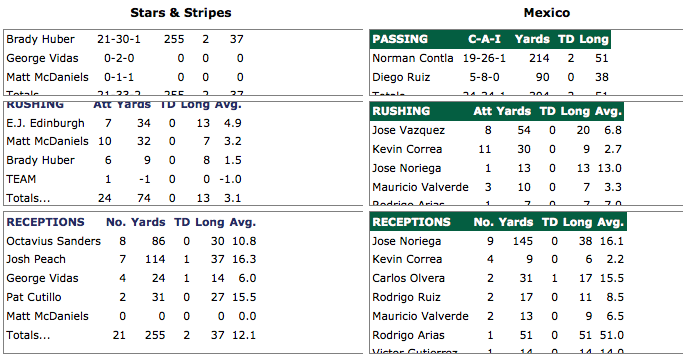 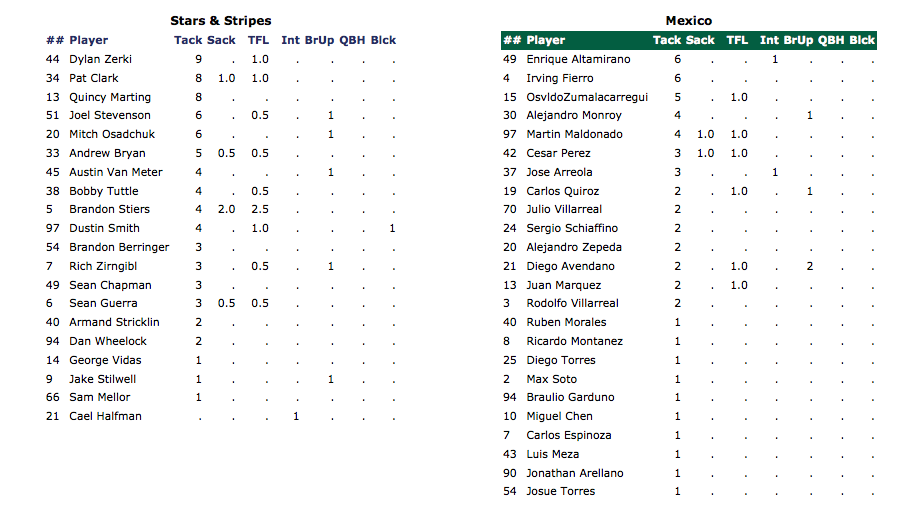