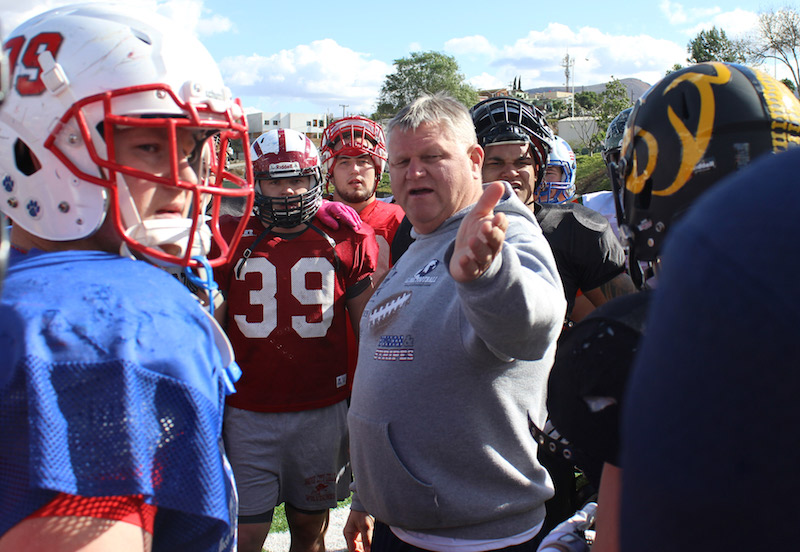 Don DeWaard returns to Mexico as head coach of Team Stars & Stripes for the fourth time, so what better time than now to remember his first game in charge of the NCAA Division II select team than now, on Throwback Thursday.

DeWaard, who recently retired from his role as defensive coordinator at Central College in Pella, Iowa, was a veteran of the American traveling team’s coaching staff before taking on the head coaching responsibilities.

Here’s how things went for Coach DeWaard and Team Stars & Stripes, three years ago on 2012…

Team Stars & Stripes scored 15 unanswered points in the second quarter and went on to defeat the CONADEIP All-Stars from Mexico 32-15 in the fourth annual Tazón de Estrellas on Saturday afternoon at Fortaleza de Azul in Guadalajara.

The Americans evened the series at 2-2 against the Mexican hosts and won on the head coaching debut of Don DeWaard of Central (Iowa) College.

“It was a fabulous week and it had a good ending with a solid win,” De Waard said. “The keys were the first half turnovers and the blocked kick for a safety. But we also did a great job of taking care of the ball and by not giving up any big plays. That’s how you win football games no matter if you are in the USA or in Mexico. I’m very proud of how our guys represented themselves all week.”

Jordan Gay of Centre (Ky.) and Tyrone Notice of Framingham State accounted for all 15 of Team Stars & Stripes second quarter scoring and defensive back Notice was named the Team Stars & Stripes MVP by the media having returned an interception for a touchdown and blocked a punt for a safety.

Gay got the Americans rolling with a 39-yard field goal with 11:44 left in the first half and three plays later, Notice returned an interception 43 yards for a score and a 10-0 lead with 10:27 left in the half.

On Mexico’s ensuing possession, Notice further stamped his mark on the game as he blocked a punt for a safety after Seth Carson of Central (Iowa) and Wisconsin-Whitewater’s Jake Hohlstein recorded back-to-back sacks.

The CONADEIP All-Stars, led by legendary Tec de Monterrey head coach Frank Gonzalez, got on the board with a 26-yard field goal by Adolfo Medellin with 16 seconds left in the half.

Team Stars & Stripes took the second half kickoff and marched 69 yards in 11 plays and scored on a 23-yard field goal by Gay to go back up 18-3 with 8:46 left in the third quarter.

The Mexicans got within nine points on a 2-yard run by Salvadore Lopez with 2:19 left in the half, but the two-point conversion failed and the Americans then pulled away.

The Elmhurst College pairing of quarterback Joe Furco and tight end Ryan Maguire teamed up for a spectacular, one-handed catch by the receiver and a 30-yard touchdown pass to extend the lead to 25-9 with 12:30 left in the game.

After the American defense forced a home team punt, Team Stars & Stripes put the game away by driving 58 yards in five plays and scored on an 8-yard run by Dimeko Price of Kalamazoo (Mich.) University with 6:53 left in the game.

The CONADEIP All-Stars wrapped up the scoring with a 1-yard run by Luis Lopez with 3:13 left.

“I am humbled and blessed to be named Team Stars & Stripes MVP,” Notice said. “I owe it all to my teammates. This was a complete team win. I just happened to make a couple of plays. On the pick, I just jumped the route and got some great blocks inside the 10 to get into the end zone.

“On the blocked punt, we had practiced that all week and a seem in their line opened up just like coach said it would and I got to the punter pretty quickly and blocked it.”

Team Stars & Stripes out-gained their opponent 336-259 in total offense, including a 197-124 advantage on the ground.
James Clay of Mt. St. Joseph had 61 yards rushing on nine carries to lead TSS. Merchant Marine quarterback Alex Coviello rushed for 28 yards on six attempts and Salisbury’s Joe Benedetti gained 27 yards on three rushing attempts. Furco was 9 of 16 passing for 139 yards and a score.

The Tazón de Estrellas and its forerunner the Aztec Bowl have produced a series of exciting games and established a fierce but friendly rivalry between the Americans and Mexicans. The Tec Monterrey All-Stars won 24-12 in 2009 before Team Stars & Stripes leveled the series with a 48-7 victory in Toluca in 2010 and the CONADEIP All-Stars won by a margin of 45-27 in 2011. The Americans have now leveled the series at 2-2.