Two more American football games played between teams from the United States and Mexico, who have been brought together by Global Football President and Founder Patrick Steenberge, will take place this weekend in Jacksonville and San Diego.

Through relationships forged during 20 years at the helm of Global Football, Steenberge has connected six high school and college teams separated by a border but united by sport, resulting in a series of three exhibition games being played during the 2016 season.

The first of the trio of games played on September 3 saw Illinois Wesleyan defeat Monterrey Tec CEM 33-16 at Tucci Stadium in Bloomington, Illinois.

“I am thrilled to have been able to make the introductions that have resulted in these games,” said Patrick Steenberge. “Having worked with the top universities in Mexico now for some 20 years, this has been a goal of mine for some time, to have quality match ups like these occur.

“Home fans in the United States will be impressed with the quality of the Mexican coaches, players and administrators, who are very professional with all they do. I know they are excited to be on the campuses of these fine American schools, and I hope to make many more personal introductions to build lasting friendships and foster more games in the future.”

Under head coach Hector Cuervo, Prepa Tec Borregos from Mexico City will face a Bolles School team that has an unbeaten 8-0 conference record under head coach Corky Rogers, who has the most wins, playoff victories and state titles in Florida high school history.

“One of the things we really appreciate is what Patrick Steenberge has done through Global Football, with his ties to so many great contacts, making this game possible,” said Coach Rogers. “We were looking for a game at this time of the year and we thought that playing against Prepa Tec would be very appealing. From the football standpoint, we don’t know what quite to expect from our opponent, but it will be a very positive experience for our team and our school.”

Global Football’s connection with The Bolles School dates back to its NFL Global Junior Championship annual Super Bowl event, which was played at Skinner-Barco Stadium in 2006, with Rogers coaching a Team USA roster drawn from schools in the Jacksonville area against the junior national teams of Canada, France, Japan and Mexico.

The Bolles School Athletic Director Matt Morris said: “We’re really excited to have the Prepa Tec team coming here to Jacksonville. We have a large international student body, so this game is an ideal fit for us. It suits the philosophy of our school in terms of diversity and being a worldwide campus. It exposes what we have here on offer to athletes and coaches from another country.”

Patrick Steenberge will be in San Diego on Saturday to watch the Toreros host the Aztecas, along with VIP guests including representatives of CONADEIP, the organization that presides over Mexico’s private universities’ athletics. They will be joined by members of the Swarovski family, whose world-famous crystal company was introduced to Global Football through its sponsorship of the Tirol Raiders in Austria, and by Ed Burke, the former legendary head coach at Torrey Pines High School.

San Diego currently boasts a 7-1 record and sits atop the Pioneer Football League standings with a 6-0 conference record, and will take on an unbeaten UDLAP team that has won all eight of its CONADEIP games this season.

“We are incredibly excited to have the opportunity to compete against the University of San Diego, and to participate in the first NCAA Division 1 (FCS) football game for a Mexican university is truly an honor,” said UDLAP head coach Eric Fisher.  “They are undefeated in conference and 7-1 overall with their only loss coming against the #16 team in the country.  This will be an unprecedented opportunity for our program and college football in Mexico to see at what level we play.

“I believe FCS is the level of football we should all be shooting for here in Mexico and would like to thank Patrick Steenberge and Global Football for getting the ball rolling on this game.  It never would have happened without his and (University of San Diego Associate Director of Athletics) Dan Yourg’s efforts. I thank them both for believing in UDLAP and football in Mexico and we plan on having a great week of practice and being great on Saturday.”

Global Football annually takes a Division III college football select team to Mexico to face the CONADEIP All-Stars in the Tazón De Estrellas, which will be played for the 19th year this December and Eric Fisher has twice coached the Mexican team. Steenberge’s San Diego connections stretch back to the 1998 and 2003 NFL Global Junior Championship events played in southern California as official events of the Super Bowl. 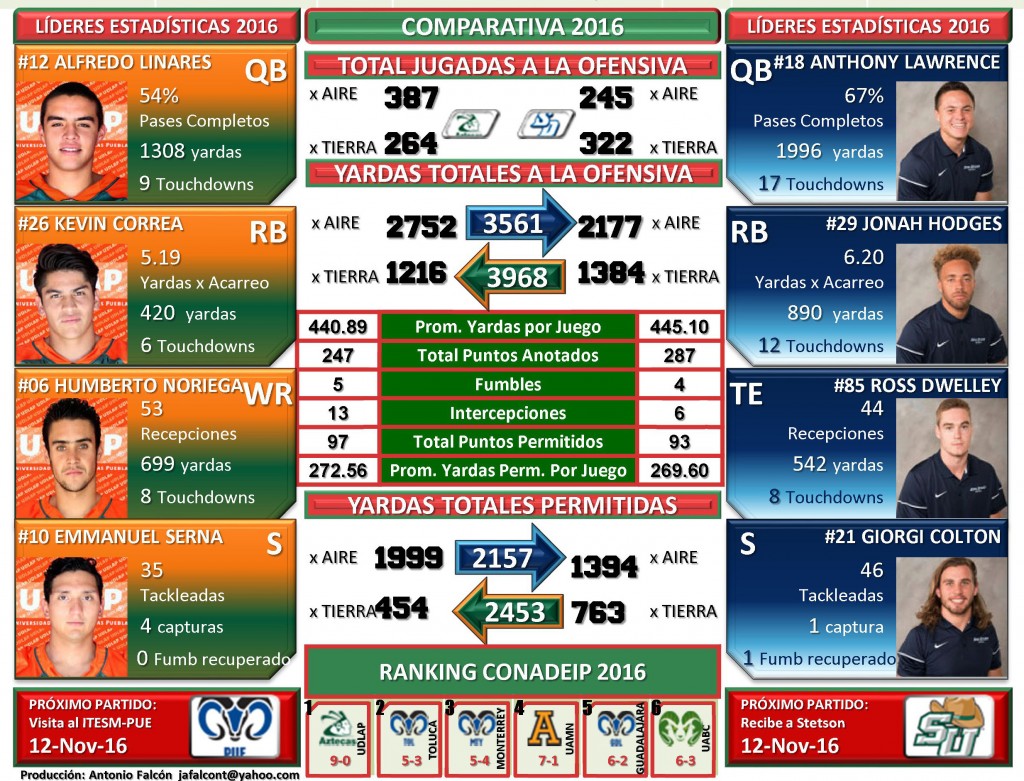